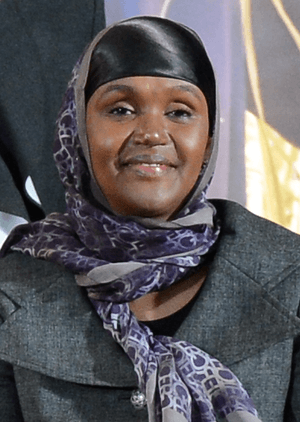 Fartuun grew up in Somalia. She married Elman Ali Ahmed, a local entrepreneur and peace activist. The couple had four daughters.

In 1996, during the high point of the Somali Civil War, Fartuun's husband was killed near the family's home in southern Mogadishu. After her husband died, Fartuun emigrated to Canada in 1999.

In 2007, Fartuun returned to Somalia. She became an advocate for peace and human rights.

Fartuun Adan received the International Women of Courage Award from the U.S. Department of State in 2013

The center is a NGO based in Mogadishu. Fartuun established the center in honor of her late husband. Fartuun is the organization's Executive Director. Fartuun's daughter Ilwad works with her.

In 2013, Adan received the International Women of Courage Award from the United States Department of State.

In 2014, she also received an award from the government of Germany for her work with the Elman Peace and Human Rights Centre.

All content from Kiddle encyclopedia articles (including the article images and facts) can be freely used under Attribution-ShareAlike license, unless stated otherwise. Cite this article:
Fartuun Adan Facts for Kids. Kiddle Encyclopedia.