The Los Angeles Fashion District is a design, warehouse, and distribution nexus of the clothing, accessories and fabric industry in Downtown Los Angeles. The Fashion District spans 90 blocks and is the hub of the apparel industry on the West Coast of the United States.

Thousands of fast-fashion wholesale vendors line the streets of the Los Angeles Fashion District. Fast-fashion vendors stock the most recent fashion trends straight from the catwalk.

Clothing companies that manufacture in the Fashion District include American Apparel and Andrew Christian.

In March and October, the district is recognized for Los Angeles Fashion Week. Crowds. Celebrities, designers, media, guests, and VIP’s from all over the country come to sneak the first peek at new collections and trends. The LA Fashion Magazine highlights new designers, trend reports, fashion news, collections, and photos straight from the catwalk during fashion week.

The District is also home to the Los Angeles Flower District and Santee Alley, the downtown open air bazaar. 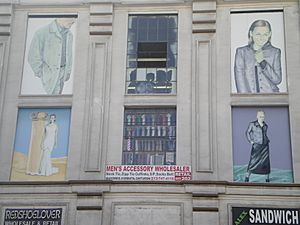 The Los Angeles garment industry was established early in the 20th century, and grew substantially in the 1920s and 1930s. In the 1950s, the area became a center for sportswear and women's clothing, partly with the contributions of Jewish entrepreneurs who had moved to the area from New York City.

Santee Alley is a heavily populated shopping path in the Fashion District between Maple and Santee Streets, stretching from Olympic Boulevard to Pico Boulevard. Counterfeit goods have been sold in Santee Alley. Similarly, the alley is also known for its illegal trade in live animals, which has been criticized by animal rights activists as cruel.

At times the LAPD has raided the alley to arrest counterfeiters. During a two-day raid in 2006, authorities seized $18.4 million worth of counterfeit designer brand merchandise from two downtown locations. On May 23, 2006, police raided a swap meet located at 500 South Los Angeles Street and found fake Tiffany jewelry worth about $6.4 million and arrested two adults. On May 24, 2006, police also raided and seized 12 million worth of counterfeit handbags, clothes, sunglasses, shoes and wallets on Santee Alley between 12th Street and Olympic Boulevard.

All content from Kiddle encyclopedia articles (including the article images and facts) can be freely used under Attribution-ShareAlike license, unless stated otherwise. Cite this article:
Los Angeles Fashion District Facts for Kids. Kiddle Encyclopedia.