Skid Row is a neighborhood in Downtown Los Angeles. The area is officially known as Central City East.

As of a 2019 count, the population of the district was 4,757. Skid Row contains one of the largest stable populations (about 4,200–8,000) of homeless people in the United States and has been known for its condensed homeless population since at least the 1930s. Its long history of police raids, targeted city initiatives, and homelessness advocacy make it one of the most notable districts in Los Angeles.

The term "skid row" or "skid road", referring to an area of a city where people live who are "on the skids", derives from a logging term. Loggers would transport their logs to a nearby river by sliding them down roads made from greased skids. Loggers who had accompanied the load to the bottom of the road would wait there for transportation back up the hill to the logging camp. By extension, the term began to be used for places where people with no money and nothing to do gathered, becoming the generic term for a depressed street in a city. 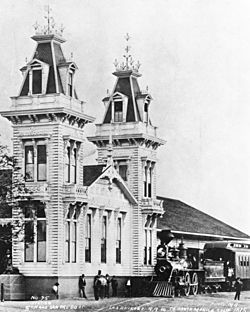 The corner of 5th and San Pedro in 1875
Skidrow Serenade

The population is probably more motley than that in a similar district of any other American city. Jews, Greeks, and Italians in the doorways of pawnshops and secondhand clothing stores vie with one another to lure the unwary passer-by inside. A fat German runs a beer parlor and just across the street a dapper Frenchman ladles up 5-cent bowls of split pea soup. A large, blond woman named Sunshine, born in Egypt, manages one of the cleaner rooming houses. A few Chinese practically monopolize the hand laundry business, and Japanese the cheapest cafes and flophouses. American Indians barter for forbidden whiskey. Chattering Mexicans loiter on the steps leading up to a second-floor hotel. Dapper Negroes, better dressed than any other vagabonds, wander by in riotous groups.

At the end of the 19th century, a number of residential hotels opened in the area as it became home to a transient population of seasonal laborers. By the 1930s Skid Row was home to as many as 10,000 homeless people, alcoholics, and others on the margins of society. It supported saloons, residential hotels, and social services which drew people from the populations they served to congregate in the area.

In June 1947, LAPD chief Clemence B. Horrall ordered what he called a "blockade raid" of the whole Skid Row area. Over 350 people were arrested. Assistant Chief Joseph Reed, who claimed that "at least 50 percent of all the crime in Los Angeles originates in the Skid Row area," stated that there had been no "strong arm robberies" on Skid Row as late as one week after the raid. Long time residents, however, were skeptical that the changes would last.

In 1956, the city of Los Angeles was in the midst of a program to "rehabilitate" Skid Row through the clearance of decaying buildings. The program was presented to property owners in the area as an economy measure. Gilbert Morris, then Superintendent of Building, said that at that point the provision of free social services to the approximately one square mile of Skid Row cost the city over $5,000,000 per year as opposed to the city average of $110,000 per square mile annually. The city used administrative hearings to compel the destruction of nuisance properties at the expense of the owner. By July 1960 the clearance program was said to be 87% complete in the Skid Row area.

In the 1970s, two Catholic Workers, Catherine Morris, a former nun, and her husband, Jeff Dietrich, founded the "Hippie Kitchen" in the back of a van. Forty years later, in April 2014, aged 80 and 68, they remained active in their work feeding Skid Row residents.

In February 1987, LAPD chief Daryl Gates, backed by then-mayor Tom Bradley, announced plans for another crackdown on the homeless on Skid Row. Police and firefighters conducted a number of sweeps through the area but the plan was abandoned due to opposition by advocates for the homeless.

When Gates announced in May that the crackdown would resume, Los Angeles City Attorney James K. Hahn responded that he would not prosecute people arrested in the planned sweeps. Hahn stated that he was "not going to prosecute individuals for not having a place to stay. I simply will not prosecute people for being poor, underprivileged and unable to find a place to sleep until I'm convinced that a viable alternative to sleeping on the streets exists." Gates, still backed by Bradley, responded: "As the elected city attorney of Los Angeles, Mr. Hahn has a responsibility to file prosecutable cases which are presented to him by the Los Angeles Police Department."

A few days later, then-Councilman Zev Yaroslavsky introduced a proposal that the city stop enforcing its anti-camping laws on Skid Row until adequate housing could be found for all its residents. The council rejected Yaroslavsky's proposal, but after hearing testimony from Assistant Police Chief David Dotson describing the LAPD's intended crackdown methodology, the council passed a motion asking Gates not to enforce the anti-camping laws until adequate housing could be found for the area's residents.

In September 2005, hospitals and law enforcement agencies were discovered to be "dumping" homeless people on Skid Row. Then Mayor Antonio Villaraigosa ordered an investigation and William Bratton, LAPD chief at the time, claimed that the Department was not targeting homeless people specifically, but only people who violate city ordinances. The Los Angeles City Attorney investigated more than 50 of about 150 reported cases of dumping. By early 2007, the city attorney had filed charges against only one hospital, Kaiser Permanente. Because there were no laws specifically covering the hospital's actions they were charged, in an untested strategy, with false imprisonment. In response to the lack of legal recourse available to fight patient dumping, California state senator Gil Cedillo sponsored legislation against it in February 2007.

In 2002, newly appointed LAPD chief William Bratton announced a plan to clean up Skid Row by, among other things, aggressively enforcing an old "anti-camping" ordinance. Robert Lee Purrie, for instance, was cited twice for violating the ordinance in December 2002 and January 2003 and his possessions: "blankets, clothes, cooking utensils, a hygiene kit," and so on, were confiscated by the police. 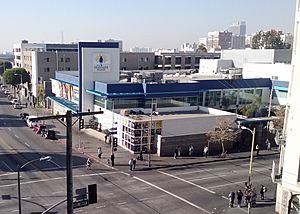 The Midnight Mission on Skid Row

In April 2006, United States Court of Appeals for the Ninth Circuit ruled in favor of the ACLU in its suit against the city of Los Angeles, filed on behalf of Purrie and five other homeless people, finding that the city was in violation of the 8th and 14th Amendments to the U.S. Constitution and sections of the California Constitution guaranteeing due process and equal protection and prohibiting cruel and unusual punishment. The court stated that "the LAPD cannot arrest people for sitting, lying, or sleeping on public sidewalks in Skid Row." The court said that the anti-camping ordinance is "one of the most restrictive municipal laws regulating public spaces in the United States."

The ACLU sought a compromise in which the LAPD would be barred from arresting homeless people or confiscating their possession on Skid Row between the hours of 9:00 p.m. and 6:30 a.m. The compromise plan, which was accepted by the city of Los Angeles, permits sleeping on the sidewalk except "within 10 feet of any business or residential entrance" and only between these hours.

Downtown development business interests and the Central City Association (CCA) came out against the compromise. On September 20, 2006, Los Angeles City Council voted to reject the compromise. On October 3, 2006, police arrested Skid Row's transients for sleeping on the streets for the first time in months. On October 10, 2006, under pressure from the ACLU, the city tacitly agreed to the compromise by declining to appeal the court's decision. 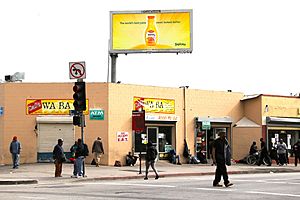 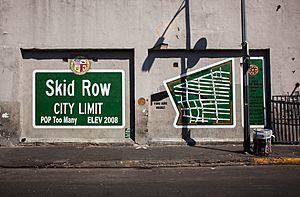 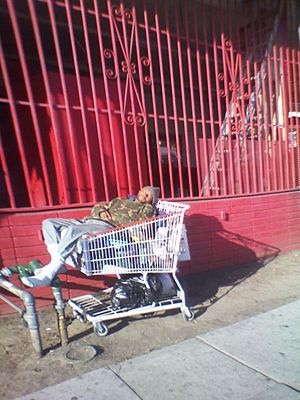 The site has appeared as a location in several movies, including The Sting, and television shows such as Starsky & Hutch, Baretta, and Quincy ME. The 1960 comedy horror film The Little Shop of Horrors. However, the location of the 1982 musical (and its 1986 film adaptation) was moved to New York City.

Skid Row was also used as a location for filming the music video for the Michael Jackson song "Beat It".

Line 18 - Koreatown to Montebello (via 5th and 6th Streets)

All content from Kiddle encyclopedia articles (including the article images and facts) can be freely used under Attribution-ShareAlike license, unless stated otherwise. Cite this article:
Skid Row, Los Angeles Facts for Kids. Kiddle Encyclopedia.