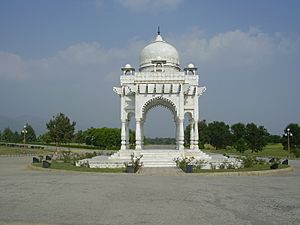 Fatima Jinnah Park, sometimes known as F-9 park (pointing out the fact that the covered area is spread out through the entire sector), is a public recreational park situated in sector F-9 of Islamabad, Pakistan. The park is considered one of the largest (in terms of covered area) in South-central Asia. It was named after the revered "Madre Millat" (Mother of the Nation) Miss Fatima Jinnah- younger sister of the founder of Pakistan.

All content from Kiddle encyclopedia articles (including the article images and facts) can be freely used under Attribution-ShareAlike license, unless stated otherwise. Cite this article:
Fatimah Jinnah Park Facts for Kids. Kiddle Encyclopedia.