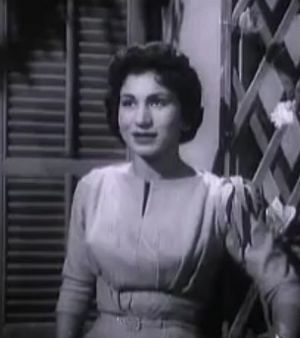 Fayza Ahmed (Arabic: فايزة أحمد‎code: ar is deprecated ; December 5, 1934 – September 24, 1983) was a Syrian-Egyptian-Lebanese singer and actress. During her career, she appeared in six films.

Fayza Ahmed was born in 1934 in Damascus to a Syrian father and a Lebanese mother. She had five children and nine grandchildren.

On singing, Fayza Ahmad emerged at a time when the field was already crowded with formidable competitors. These included;

Fayza Ahmed died in 1983 in Cairo after suffering from cancer.

All content from Kiddle encyclopedia articles (including the article images and facts) can be freely used under Attribution-ShareAlike license, unless stated otherwise. Cite this article:
Fayza Ahmed Facts for Kids. Kiddle Encyclopedia.