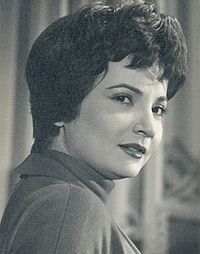 Fatima Ahmad Kamal (Arabic: فاطمة أحمد كمال‎code: ar is deprecated ), better known by her stage name Shadia, (8 February 1931 – 28 November 2017) was an Egyptian actress and singer. She was famous for her roles in light comedies and drama in the 1950s and 1960s. Her first appearance was in the movie el-Aql Fi Agaza (The Mind on Vacation). She retired after her last movie La Tas'alni Man Ana (Don't Ask Me Who I Am). She was born in Cairo.

Shadia was hospitalized on 4 November 2017 after suffering a massive stroke in Cairo. She was placed under intensive care and on 9 November was in stable condition. On 28 November 2017, Shadia died at hospital in Cairo of respiratory failure, aged 86.

All content from Kiddle encyclopedia articles (including the article images and facts) can be freely used under Attribution-ShareAlike license, unless stated otherwise. Cite this article:
Shadia Facts for Kids. Kiddle Encyclopedia.