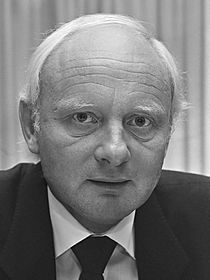 Ferdinand Alexander "Ferry" Hoogendijk (23 November 1933 – 14 February 2014) was a Dutch political scientist, journalist and politician. He was the editor of Elsevier and a member of the parliamentary group of the Pim Fortuyn List (Dutch: Lijst Pim Fortuyn, LPF). He was born in Gouda, South Holland.

All content from Kiddle encyclopedia articles (including the article images and facts) can be freely used under Attribution-ShareAlike license, unless stated otherwise. Cite this article:
Ferry Hoogendijk Facts for Kids. Kiddle Encyclopedia.