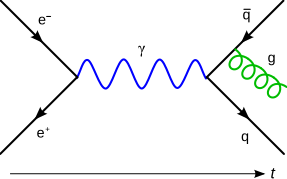 In this Feynman diagram, an electron and positron destroy each other, producing a virtual photon which becomes a quark-antiquark pair. Then one radiates a gluon

A Feynman diagram is a diagram that shows what happens when elementary particles collide.

Feynman diagrams are named after Richard Feynman, who won the Nobel Prize in Physics. His diagrams are very simple in the case of quantum electrodynamics (QED), where there are only two kinds of particles: electrons (little particles inside atoms) and photons (particles of light). In QED, the only thing that can happen is that an electron (or its antiparticle) can emit (or absorb) a photon, so there is only one building block for any collision. The probability amplitude for the emission is very simple—it has no real part, and the imaginary part is the charge of the electron.

All content from Kiddle encyclopedia articles (including the article images and facts) can be freely used under Attribution-ShareAlike license, unless stated otherwise. Cite this article:
Feynman diagram Facts for Kids. Kiddle Encyclopedia.