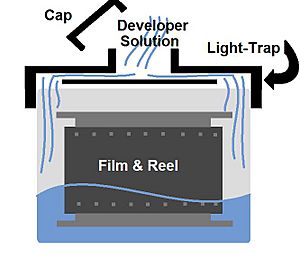 The film used in photography is able to record images. In order to make these images visible, the film needs to undergo a number of chemical processes. The result of these processes will either be negatives or slides. This is generally known as developing. Different films need different processes. The process for black and white film is different from that for slide film. In general, the provess involves the following steps:

There are different kinds of films. The most common of these is negative film. With negative film, all colors are reversed. This is corrected in an additional step of making a print of each image. So called reversal film, which is used for diapositives directly produces positive images (which are framed to become a diapositive).

This whole process is known as film processing.

All content from Kiddle encyclopedia articles (including the article images and facts) can be freely used under Attribution-ShareAlike license, unless stated otherwise. Cite this article:
Film processing Facts for Kids. Kiddle Encyclopedia.