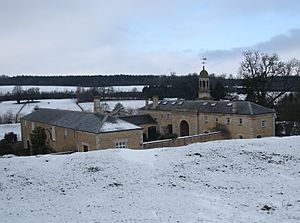 Site of Fineshade Abbey from the Jurassic Way

Fineshade Priory was a priory of Augustinian Canons Regular in Northamptonshire, England. The remains of the site are about 5 miles (8.0 km) north-east of Corby along the A43 road.

It was founded before 1208 by Richard Engayne (Engain), Lord of Blatherwycke on the site of a small castle and dissolved in 1536.

The buildings were granted to Lord Russell 1541/2. Sir Robert Kirkham bought it in 1545 and converted the west range into a country residence, which was demolished along with the remains of the priory in 1749.

A house was subsequently built on the site but demolished in 1956. The stable block remains, converted to a residence.

Fineshade Wood is part of Rockingham Forest. The civil parish has merged with Duddington.

All content from Kiddle encyclopedia articles (including the article images and facts) can be freely used under Attribution-ShareAlike license, unless stated otherwise. Cite this article:
Fineshade Priory Facts for Kids. Kiddle Encyclopedia.