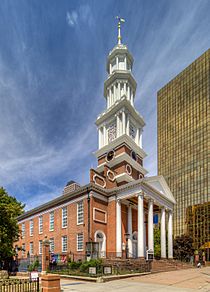 The First Church of Christ, located in downtown Hartford at the corner of Main and Gold Streets, is a prominent local example of Classical Revival architecture. Daniel Wadsworth probably designed it, loosely following the example of architect James Gibbs's church of Saint Martin in the Fields in London. A monumental two-story temple portico with modified Ionic columns forms the entrance to the brick structure, and is surmounted by a three-stage tower that repeats the columns at an increasingly diminished scale at each major level. There are three entrances on the main facade, each topped by a half-round fanlight window. The Ancient Burying Ground extends west and north of the church.

Notable members and persons buried in the burying ground

All content from Kiddle encyclopedia articles (including the article images and facts) can be freely used under Attribution-ShareAlike license, unless stated otherwise. Cite this article:
First Church of Christ and the Ancient Burying Ground Facts for Kids. Kiddle Encyclopedia.