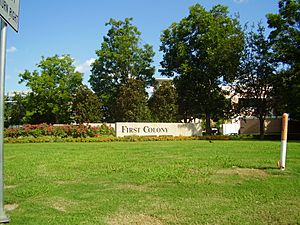 First Colony is a 9,700-acre (39 km2) master-planned community in Fort Bend County, Texas. The community, with approximately 50,000 residents, encompasses over 9,500 residential houses in 61 neighborhoods located in across southern parts of Sugar Land with few neighborhoods spanning into Missouri City. 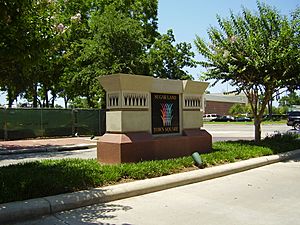 When First Colony was under development in 1977, very little development was in the area. Bill Schadewald said that he, as a rookie real estate reporter, received speculation from local sources questioning whether "a project so large and such a distance could succeed."

Sugar Land gradually annexed most of its portion of First Colony within its municipal boundaries during the early to mid 1990s. For instance, the annexation of Municipal Utility District (MUD) 12 in First Colony occurred on December 17, 1991; this included 1,064 acres (4.31 km2), including 2,314 homes, 433 condominiums and 350,000 square feet (33,000 m2) of commercial property along Texas Highway 6.

The Sugar Land Town Square, a development that began in the 2000s, was developed on one of the few remaining parcels of land in First Colony. In 2011 Schadewald said "Now: I guess it’s safe to say First Colony has been a success." 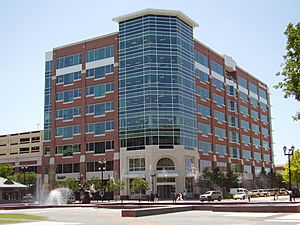 Several restrictions are placed on the development of commercial businesses. Signs of businesses within First Colony cannot be placed on poles. Exterior aesthetics common to retail businesses (from department store exteriors to restaurants) must have a brick-covered exterior and white lettering. As a result, fast food restaurants in First Colony differ in appearance from fast food restaurants in other areas. Steve Ewbank, the executive vice president of Planned Community Developers, the developer of First Colony, said that a brick shopping center in First Colony had a price tag higher by 10 to 20 percent than the price of typical shopping center.

All content from Kiddle encyclopedia articles (including the article images and facts) can be freely used under Attribution-ShareAlike license, unless stated otherwise. Cite this article:
First Colony Facts for Kids. Kiddle Encyclopedia.