First Parish Church is an historic church at 425 Congress Street in Portland, Maine. Built in 1825 for a congregation established in 1674, it is the oldest church building in the city, and one of its finest examples of Federal period architecture. It was listed on the National Register of Historic Places in 1973. The congregation is Unitarian Universalist; its pastor is Reverend Christina Sillari. 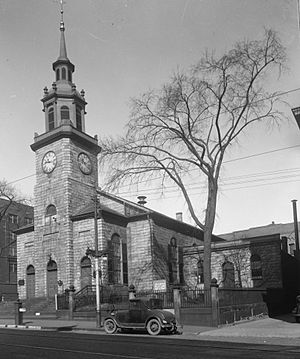 The First Parish Church stands on the north side of Congress Street, opposite its intersection with Temple Street, in the civic heart of Portland, with Portland City Hall a short way to the east, the public library a short way west, and Portland High School immediately to its north. The church is a tall single-story structure, built out of granite from Freeport. The granite is ashlar, except for finely dressed corner quoining. The building is basically rectangular, with a projecting three-bay entrance vestibule, from which a square tower projects slightly further. The three entrances are set in round-arch openings with a fanlight above. The multistage tower has an arched louver above a marble date panel at the second stage, and a clock at the third stage, which is differentiated from the second by rounded corners. The belfry is octagonal, with round-arch louvered openings, and is topped by a smaller octagonal cupola and a short spire.

The church congregation was founded in 1674, when Portland was known as Falmouth, and its early history was interrupted by Native American attacks. Its period of continuous history begins in 1718, when it began meeting in a log church, which was replaced in 1721 and again in 1740 by frame structures. The latter was where a convention was held to draft the soon-to-be state's first constitution in 1819 (statehood being awarded the following year). This church was built on the site of the 1740 church, and was the first major granite structure east of Portsmouth, New Hampshire. The building was the only one in the surrounding area to survive Portland's great fire of 1866.

All content from Kiddle encyclopedia articles (including the article images and facts) can be freely used under Attribution-ShareAlike license, unless stated otherwise. Cite this article:
First Parish Church (Portland, Maine) Facts for Kids. Kiddle Encyclopedia.