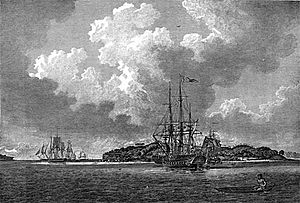 An engraving of the First Fleet in Botany Bay at voyage's end in 1788, from The Voyage of Governor Phillip to Botany Bay.

It had been built in Whitby in 1780. The ship had a contract with the British Government to transport food and equipment. The owners were paid at a rate of 10 shillings per ton per month until the ship returned to Deptford.

The Fishburn and the Golden Grove left Port Jackson in November 1788 to return to England. She had to rest at the Falkland Islands for several days as several sailors were sick. She was returned to her owners at Deptford on May 25, 1789. No other information has been found about the ship afterwards. 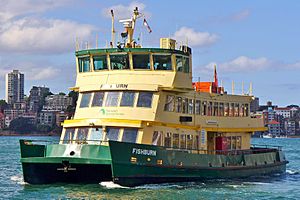 First Fleet ferry "Fishburn" which was named after the ship in 1985.

There is a monument to Fishburn in the First Fleet Memorial Gardens at Wallabadah, New South Wales. An Urban Transit Authority First Fleet ferry was named after Fishburn in 1985.

All content from Kiddle encyclopedia articles (including the article images and facts) can be freely used under Attribution-ShareAlike license, unless stated otherwise. Cite this article:
Fishburn (ship) Facts for Kids. Kiddle Encyclopedia.