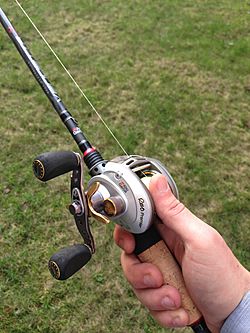 A fishing reel is a device attached to a fishing rod used in winding and unwinding fishing line.

Modern fishing reels are designed to help in casting for distance and accuracy. Reels also retrieve line, usually with a handle. Fishing reels are traditionally used in the recreational sport of angling. They are also used in the sport of competitive casting. Reels are usually attached to a fishing rod by some means. However specialized reels are made to be mounted directly to the boat gunwales or transoms.

The first writing describing a fishing reel is from about 1100 years ago in China. Fishing reels first appeared in England around 1650 AD. By the 1760s, London tackle shops were advertising gear-retrieved reels. An American watchmaker and inventor, George W. Snyder, invented the first gear multiplying reel abut 1810.

All content from Kiddle encyclopedia articles (including the article images and facts) can be freely used under Attribution-ShareAlike license, unless stated otherwise. Cite this article:
Fishing reel Facts for Kids. Kiddle Encyclopedia.