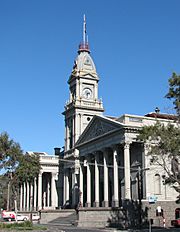 Fitzroy Town Hall is a civic building located in Napier Street in Fitzroy, a suburb of Melbourne, Australia.

It was constructed in two separate stages. The first consisted of a hall and tower which was designed by William J. Ellis and built in 1873. Between 1887 and 1890 a new stage designed by George Johnson was added to this comprising municipal offices, a police station and a courthouse as well as extensions to the hall. The clock tower added at this time replaced the original tower.

The building is an example of the Free Classical style of Victorian architecture and is recorded as a "Heritage place" by Heritage Victoria.

All content from Kiddle encyclopedia articles (including the article images and facts) can be freely used under Attribution-ShareAlike license, unless stated otherwise. Cite this article:
Fitzroy Town Hall Facts for Kids. Kiddle Encyclopedia.