Flag of Alberta facts for kids 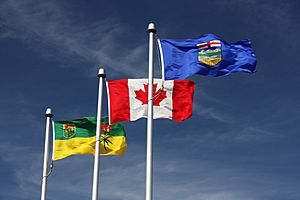 The flag of Alberta is an official symbol of the province of Alberta, Canada. In 1968, the provincial legislature authorized the design of a flag, adopting it on 1 June 1968.

The flag has the proportions 1:2, with the provincial shield of arms in the centre of an ultramarine blue background. The shield's height is 7⁄11 that of the flag's height.

The provincial colours, adopted in 1984, are blue and gold (deep yellow); they are also referred to as "Alberta blue" and "Alberta gold", appearing on the flag/shield in the sky/background and wheat background, respectively.

In 2001, a survey conducted by the North American Vexillological Association (NAVA) placed the Alberta provincial flag 35th in design quality out of the 72 Canadian provincial, U.S. state, and U.S. territory flags ranked.

Around the time of the upcoming centennial celebration of Canadian Confederation petitions were submitted in November 1966 to Premier Ernest Charles Manning by the Social Credit Women's Auxiliaries of the Alberta Social Credit League to give Alberta its own unique flag. The flag was designed and approved as the official provincial flag by the Alberta legislature on June 1, 1968.

The Calgary Flames use the flag as a shoulder patch logo on their home and away uniforms.nds:Flagg vun Alberta

All content from Kiddle encyclopedia articles (including the article images and facts) can be freely used under Attribution-ShareAlike license, unless stated otherwise. Cite this article:
Flag of Alberta Facts for Kids. Kiddle Encyclopedia.