Flag of Milwaukee facts for kids

The official flag of Milwaukee was adopted in 1954. A 2004 survey by the North American Vexillological Association rated the Milwaukee flag 147th out of 150 flags of major American cities.

It displays symbols of Milwaukee on a medium blue background. In the center, a gear, representing industry, bears symbols of Milwaukee's identity and history. An Indian head, resembling the Milwaukee Braves logo at the time, represents Native American origins. A flag with two stars, said to be a Civil War-era flag,, may also represent a service flag. A lamp symbol in the upper right was once associated with the Milwaukee City Library. Below this is Milwaukee City Hall, representing government, which is flanked by a church, a factory, and the County Stadium. The golden barley stalk on the left represents Milwaukee's brewing history, and the red ship with water symbolizes Milwaukee's status as a port city.

The first attempt to introduce a civic flag came in an 1897 Milwaukee Journal contest. The winning entry included an oak branch with the motto "Steady Progress" over a cream-colored field. The design was praised by then-mayor William C. Rauschenberger, who lost reelection shortly thereafter. The flag never came into use.

In the 1950s, Milwaukee leaders discovered it was one of only four cities with a population over 500,000 without a flag, and so the city held a contest for flag designs. Former alderman Fred Steffan combined elements of some of the better entries to create the flag.

Efforts to redesign the flag have been initiated four times. The first three proposed redesigns were rejected. As of June 2016[update], a fourth proposed candidate has been selected but not yet formally approved.

In 1975, a Milwaukee Public Museum employee won a citywide contest. Although the designer won the contest's prize of a $100 savings bond, his flag was not adopted.

In 2001, the Milwaukee Arts Board of the Milwaukee Common Council held a contest to attract designs for a new flag. Over 105 designs were submitted, but none met with the approval of the board, and the old design was kept. In a 2004 poll conducted by the North American Vexillological Association, the flag of Milwaukee was rated the fourth worst of all major cities in the United States. The symbols on the flag were common tropes of industry, manufacturing, and agriculture during the mid-20th century. 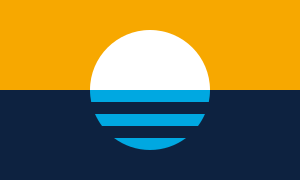 "Sunrise Over the Lake" by Robert Lenz, winner of the 2016 People's Flag of Milwaukee design contest

In 2015, in response to negative media coverage spurred by a 99% Invisible episode, Steve Kodis, a local graphic designer, partnered with Greater Together, an AIGA-affiliated non-profit, to launch a flag contest called "The People's Flag of Milwaukee". The public submitted 1,006 entries, from which five finalists were chosen in 2016. In an online poll of over 6,000 people, a design called "Sunrise Over the Lake" received the highest rating of the five. The flag's design is described as follows:

All content from Kiddle encyclopedia articles (including the article images and facts) can be freely used under Attribution-ShareAlike license, unless stated otherwise. Cite this article:
Flag of Milwaukee Facts for Kids. Kiddle Encyclopedia.