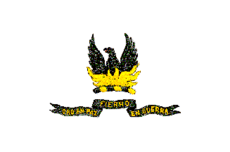 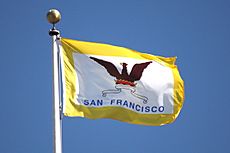 In 1900, banker and art patron Mayor James Duval Phelan, mayor from 1897 to 1902, recommended to the Board of Supervisors that San Francisco adopt a flag and motto. Over 100 designs were submitted and John M. Gamble's proposal was selected. It depicts a phoenix rising from its ashes on a white field. The mythological phoenix appears in many ancient cultures and is a symbol of immortality. When the long-lived phoenix feels death is near, it builds a nest of aromatic wood and sets it afire. A new phoenix then arises from the ashes, just as San Francisco arose from the great fires of the 1850s. The motto "Oro en paz y fierro en guerra" "Gold in Peace and Iron in War" refers to the city's then-recent experience during the Spanish–American War as the embarkation point for troops to the Philippines in 1898.

Below the phoenix is a banner which reads in Spanish, Oro en Paz—Fierro en Guerra (English: "Gold in Peace, Iron in War"). Because of this, the official city colors are gold and black; these two colors decorate the dome of San Francisco City Hall.

All content from Kiddle encyclopedia articles (including the article images and facts) can be freely used under Attribution-ShareAlike license, unless stated otherwise. Cite this article:
Flag of San Francisco Facts for Kids. Kiddle Encyclopedia.