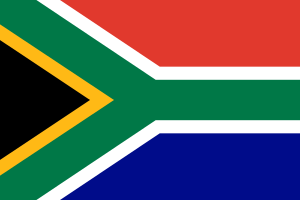 The national flag of South Africa was adopted in April 1994.

It was designed by Frederick Brownell in March 1994.

It has horizontal bands of red (on the top) and blue (on the bottom), It is separated by a central green band which splits into a horizontal "Y" shape.

All content from Kiddle encyclopedia articles (including the article images and facts) can be freely used under Attribution-ShareAlike license, unless stated otherwise. Cite this article:
Flag of South Africa Facts for Kids. Kiddle Encyclopedia.