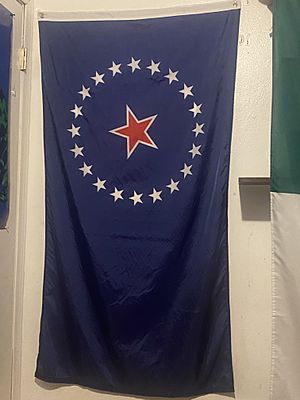 The flag of Springfield, hanging on a white wall.

The municipal flag of Springfield, Illinois, is the lawful flag of the capital of the U.S. state of Illinois, Springfield. Its background is "Old Glory blue". The flag is emblazoned with a circle of 20 small, white stars, all pointed upward; the circle is offset, slightly, to the left of the flag. Those stars encircle a large, white-bordered "Old Glory red" star, also pointed upward. The center star is described as two stars, one atop the other, in the Springfield, Illinois Code of Ordinances. In the past, the flag has the words "Springfield Illinois," across its bottom; now photographs show no lettering on the flag, and governmental buildings have been seen sporting a version absent text.

In the case of hand-held or carried flags the proportions are 2:3, two units in height to every three in breadth. When the Springfield flag is flown on a flagpole, its aspect ratio should be 1:2, unless the U.S. government prescribes differing dimensions for the United States flag, in which case the Springfield flag would defer to those dimensions. When the flag is displayed from windows or over the city streets it is allowed to be notched or pointed.

The Springfield city clerk is considered the "custodian of the flag." The flag is displayed at city hall and at other municipal buildings and in public places. It is also displayed on specific national holidays or occasions when the flag is generally displayed. It is stipulated that the municipal flag should never take precedence over the United States flag.

The flag was designed in a contest conceived by Springfield resident and famed poet Vachel Lindsay. The contest was sponsored by the Springfield Art Association and its winner was S.T. Wallace. The Springfield city council adopted the flag design on October 22, 1917 and it was first displayed on November 8, 1917. Today the flag is adorned with the word "Springfield, Illinois." Older photographs, dated May 14, 1953, show the flag, absent its lettering. Indeed, the Springfield Code of Ordinances makes no stipulation for the lettering which appears on the current flag. Instead, it describes a "pennant," similar in description to the flag. The pennant is described as containing the same elements and proportions as the flag, with the addition of the words. In the code the flag and pennant are described as two separate entities.

All content from Kiddle encyclopedia articles (including the article images and facts) can be freely used under Attribution-ShareAlike license, unless stated otherwise. Cite this article:
Flag of Springfield, Illinois Facts for Kids. Kiddle Encyclopedia.