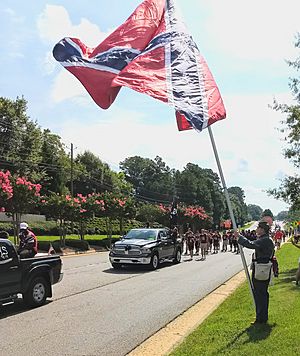 Flaggers are one of the several neo-Confederate groups active in the Southern United States. Flaggers usually operate at the state level. Their primary purpose is to make the Confederate battle flag as visible as possible.

Group members carry the flag at demonstrations and other public events, and erect it on private land. These flags are frequently visible from major highways, and have often been the subject of controversy and legal efforts to have them removed. Members, usually acting individually, also lobby or appear at meetings to speak against removal of Confederate monuments and memorials. Some are anti-Abraham Lincoln,, and for the right of states to secede, i.e., that the Confederacy was legitimate under U.S. law.

The earliest documentation of a flagger group as an organization is the Virginia Flaggers, whose Web site says they were founded in 2011. However, the flagger movement first appeared, spontaneously and unorganized, in Georgia in 2001.

The flag of Georgia from 1956 to 2001 incorporated the Confederate battle flag. Responding in part to pressure from civil rights groups who threatened an economic boycott of Georgia, Governor Roy Barnes "ramrodded" a flag change bill through the legislature. The new, hastily-designed flag, which even many of its supporters thought ugly, was in use from 2001 to 2003. It included the 1956 flag (the design of which contained the Confederate battle flag) and four others, a subset of Georgia's numerous past flags. The North American Vexillological Association called it the worst-designed state flag in the country.

There was widespread opposition to the new flag, deemed the "Barnes flag". It led, according to Barnes himself, to his defeat for reelection two years later; the flag was a major issue in the election. A new flag was designed. In a non-binding 2004 referendum, 73% of the voters expressed a preference for the new flag, based on the first Confederate national flag, the Stars and Bars, over the 2001 design. (A return to the 1956 flag with the Confederate battle flag, desired by some, was not on the ballot.)

Flaggers, as they were soon called, began displaying the Confederate battle flag, or the 1956 Georgia flag which contained it, in 2001. They appeared at political rallies and at public appearances of legislators who had voted for the Barnes flag.

All content from Kiddle encyclopedia articles (including the article images and facts) can be freely used under Attribution-ShareAlike license, unless stated otherwise. Cite this article:
Flaggers (movement) Facts for Kids. Kiddle Encyclopedia.