The Flat Rock Archives is an African American historical museum located in the city of Stonecrest, Georgia. The mission of the archive is to preserve rural African American history in Georgia. The archive is located in a historic home built by T.A. Bryant, Sr., and was donated in 2005, by Rev. T.A. Bryant, Jr. and his sister, Zudia Guthrie, to preserve and store all the Flat Rock records and documents. It was established as a museum and resource to genealogical and historic research, as well as a heritage tourism site. The Flat Rock Archives consists of a variety of historic sites including the Flat Rock African American Historic Cemetery. All of these sites are located within the Arabia Mountain National Heritage Area. See Flat Rock, Georgia to learn more about the history of this area. 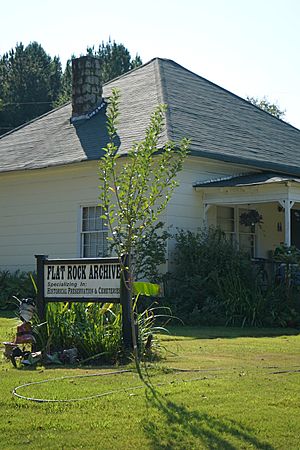 In 2006, the Flat Rock Archives was part of a segment on African American Lives, episode "Listening to our Past" featuring Chris Tucker.

One goal of the Flat Rock Archives is to preserve the memories of the Flat Rock community. President of the archive, Johnny Waits wants the sounds, memories, and stories to be preserved and heard for generations to come.

In an Atlanta Journal Constitution article from 2005, Cleveland McMullen (aged 83 at the time) shared that he grew up in Flat Rock and joined the exodus of thousands of Southern blacks who fled to the North during the Great Depression to find jobs in factories and escape enforced segregation. He recalled that Flat Rock had its own "scout" team (baseball), which played rivals from nearby communities, such as Lithonia, and, toward Atlanta, Edgewood. But McMullen can't recall the team name of the home nine, just that "it was a big deal, people came from all over. They'd have a barbecue, make a whole day of it."

In 2010, the Flat Rock Archives worked with Arabia Mountain High School to perform an honorary school graduation ceremony for eight African American elders of the Flat Rock community who were in their 70s, 80s and 90s. The students all attended Flat Rock School in the 1930s and 1940s, a time when there was such hostility to educating blacks. The students were given honorary high school diplomas from the DeKalb County school system because during the time they were in school the county did not give high school diplomas to blacks.

All content from Kiddle encyclopedia articles (including the article images and facts) can be freely used under Attribution-ShareAlike license, unless stated otherwise. Cite this article:
Flat Rock Archives Facts for Kids. Kiddle Encyclopedia.