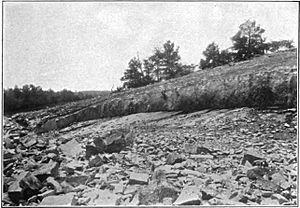 Arabia Mountain is one of Metro Atlanta's three monadnocks, which also include Stone Mountain and Panola Mountain. The unique topography and geology of this monadnock allows for unusual plant and animal species to thrive. Arabia Mountain has five species that are listed as both state and federally endangered, including the bright-red diamorpha plant that lives in small pools of water (known as vernal pools or solution pits) that form on the monadnock.

Panola Mountain is 3.63 miles (5.84 km) to the southwest. While designated as one peak on USGS maps, most users familiar with the area consider the rock formation to be two peaks: Arabia Mountain to the northeast, and Bradley Mountain to the southeast, connected by a low saddle.

Arabia Mountain appears to be composed of granite, like other nearby peaks such as Stone Mountain and Panola Mountain. Although made of metamorphic rock, the mountain is actually composed of migmatite, metamorphosed at higher temperatures than gneiss but not sufficiently melted to become granite. The resulting swirl pattern made the rock a popular building stone and many buildings in the region were constructed with stone quarried from the Lithonia district quarries.

Like Stone Mountain, Arabia Mountain was quarried for decades before the property was turned over to the DeKalb park system. Structures and excavations from the quarry operations can be seen throughout the park. The stone quarried from Arabia Mountain, officially called "Tidal Grey", was prized for its high structural density and compressive strength as well as its "swirl" pattern. Tidal Grey Arabia Mountain can be seen in the construction of buildings for the U.S. Naval Academy, the Brooklyn Bridge, and street curbing in Atlanta as well as many other Georgia cities.

Prior to 1880, the stone was hand quarried but starting in 1879, workers used drills, dynamite and air compressors to “raise a ledge” or sever a large block of stone from the mass. That allowed more control over the size of the stone and large stones could be used for dimensional or building construction. The proximity to the rail road meant that the Tidal Grey could be easily transported across the country.

Another advancement to the quarrying industry at Arabia Mountain was the discovery that adding granite grit to chicken feed helped with the birds’ digestion. The Davidson family, which owned several quarries in the area, became the largest supplier of poultry grit in the world. They claimed that the sparkling particles of mica in the Stonemo grit attracted the eye and helped the chicken's gizzard break down food. The company was so successful in distributing their feed additive, a TIME Magazine article from 1941 reported the U.S. government allowed them to continue to operate during WWII in the name of national defense. In 1949, the Lithonia district produced nearly 1.5 million tons of granite valued at the time at $3 million.

The seemingly barren landscape of Arabia Mountain is teeming with plant life specially adapted to live in the mountain's harsh environment. Arabia Mountain is one of five locations in the US where black-spored quillwort (Isoetes melanospora) are found. It is one of 44 locations in the US where little amphianthus (Amphianthus pusillus) is found. These are endangered species protected by Georgia and Federal law. The largest and most important population of black-spored quillwort and one of the largest Amphianthus populations occur here. The U.S. Fish and Wildlife Service's five-year review of these species, completed in 2008, states that "enforcement to protect sensitive areas needs improvement" in the Arabia Mountain area.

Arabia Mountain is one of a small number of locations in the southeastern United States where Small's stonecrop (Diamorpha smallii) thrives (this plant is not listed as an endangered species in Georgia or the US, but is in Tennessee). When granite and similar stone outcrops are exposed to erosion, over time, small depressions, called solution pools, form where weaker rock wears away faster than surrounding rock (often assisted by lichen). Over time, these depressions fill with sand washed down from higher locations, which accumulates a small amount of organic content from decaying dead leaves and other detritus, as well as rain water. Small's stonecrop then takes hold in these sandy hollows.

In the 1970s, the Davidson family donated over 500 acres including Arabia Mountain and surrounding lands to DeKalb County as a nature preserve for local residents to enjoy. Since then, the Davidson-Arabia Mountain Nature Preserve has been expanded several times and now includes 2,550 acres, several granite outcrops and two lakes.

On October 12, 2006, the mountain and Davidson-Arabia Mountain Nature Preserve were designated as nationally significant as a part of the Arabia Mountain National Heritage Area in recognition of its cultural, historical and natural features.

The PATH Foundation has completed more than 30 miles of a 12-foot-wide (3.7 m) concrete road for pedestrian and bicycle use running from downtown Lithonia to Stonecrest Mall and thence through the Davidson-Arabia Mountain Nature Preserve to Panola Mountain State Park, ending at the Monastery of the Holy Spirit in Conyers. This includes a spur to a parking area on Klondike Road and a spur to the DeKalb County School System's Murphey Candler Elementary School and Arabia Mountain High School.

Arabia Mountain as a DeKalb County, Georgia park is free to visitors and open seven days a week from dawn to dusk. Arabia, along with Stone Mountain and Panola Mountain, is also one of the mountains featured in the annual event, Monadnock Madness, which includes guided hikes of all three Metro-Atlanta monadnocks. In addition to year-round guided hikes, the mountain also hosts arts events such as Monadnock Muse.

On the edge of the Arabia Mountain green space is the Arabia Mountain High School Academy of Engineering Medicine and Environmental Studies, opened August 2009. The Academy is a LEED-certified building and uses the "Environment as an Integrating Context for learning" (EIC) curriculum. The high school is connected to the nature preserve via a spur bicycle path.

All content from Kiddle encyclopedia articles (including the article images and facts) can be freely used under Attribution-ShareAlike license, unless stated otherwise. Cite this article:
Arabia Mountain Facts for Kids. Kiddle Encyclopedia.