Delena cancerides, the flat huntsman or social huntsman or Avondale spider, is a large, brown huntsman spider native to Australia. It has been introduced to New Zealand, where it is sometimes known as the Avondale spider as they are commonly found in the suburb of Avondale, Auckland. This was the species used in the beginning of the 2002 movie Spider-Man, a part in Australian movie Napoleon and widely in Arachnophobia, and all films depict them as having a deadly venomous bite, but they are generally considered harmless to humans in real-life. It was first described by Charles Athanase Walckenaer in 1837. 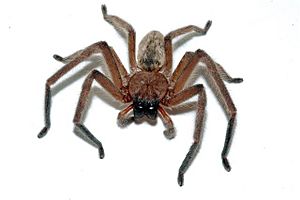 Highly unusual among spiders, the flat huntsman spider is a social species, even sharing prey. They are often found under loose bark (their flat shape is an adaptation for this) in colonies up to 300, but they are highly aggressive and commonly cannibalistic toward members from other colonies. They hunt their food rather than spin webs for it. They are timid towards humans and bites are infrequent, and when they occur, symptoms are usually very minor. 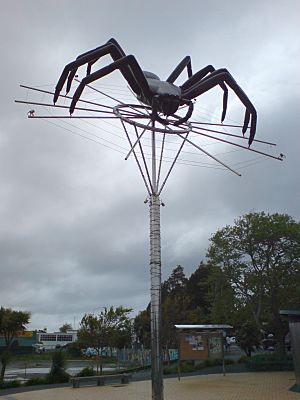 The species is found all over Australia, including Tasmania. It was introduced to New Zealand in 1924. Its range in New Zealand expanded slowly out of Avondale, a suburb of Auckland, hence the alternative New Zealand common name. There is a sculpture in the Avondale shopping centre celebrating the spider.

Various populations show major differences in the chromosomes, leading to the recognition of several "chromosomal subspecies", but these hybridize where in contact and there is little genetic divergence.

All content from Kiddle encyclopedia articles (including the article images and facts) can be freely used under Attribution-ShareAlike license, unless stated otherwise. Cite this article:
Flat huntsman Facts for Kids. Kiddle Encyclopedia.