Flipper is an American television program first broadcast on NBC from September 19, 1964, until April 15, 1967. Flipper, a bottlenose dolphin, is the pet of Porter Ricks, Chief Warden at Coral Key Park and Marine Preserve (a fictional version of John Pennekamp Coral Reef State Park in Key Largo, Florida), and his two young sons, Sandy and Bud. The show has been dubbed an "aquatic Lassie", and a considerable amount of children's merchandise inspired by the show was produced during its first run. 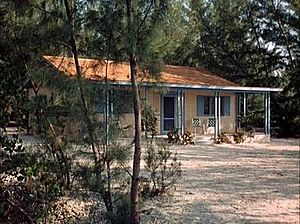 The Ricks cottage at Coral Key Park and Marine Preserve

The series follows a bottlenose dolphin named Flipper who is the wild pet of Porter Ricks, a park warden; and his sons, Sandy (15) and Bud (10). Flipper lives in a lagoon near the Ricks cottage at Coral Key Park and Marine Preserve. With the Ricks family, Flipper helps protect the park and preserve and its wild inhabitants. He is also instrumental in apprehending criminals and thugs in the park. Flipper is generally recognized by the characters in the show (and the theme song) as being a particularly intelligent and capable dolphin. Flipper is the special companion of the youngest member of the Ricks family, Bud, and several episodes feature Flipper rescuing Bud from dangerous situations. Flipper is able to somehow communicate through different chatter-like tones, head nods and shakes and other attention-seeking antics with Sandy and Bud and draw their (and Porter's) attention to danger or in the direction of people needing help. There are few women in the lives of the Ricks males but in the first season, Porter does have a date while Sandy falls for the girl operator of a floating zoo who appears in four episodes. A female oceanographer enters the series in the second season to add a feminine touch to the proceedings but little more than mild flirtations and fondness between her and Porter ensues. Promotional material for the third season announced a new girlfriend for Sandy, although she only appeared in one episode and he has an innocently flirtatious scene with another girl in a separate episode. The series is distinguished for its lush photography of subtropical Florida and its colorful underwater sequences.

All content from Kiddle encyclopedia articles (including the article images and facts) can be freely used under Attribution-ShareAlike license, unless stated otherwise. Cite this article:
Flipper (1964 TV series) Facts for Kids. Kiddle Encyclopedia.