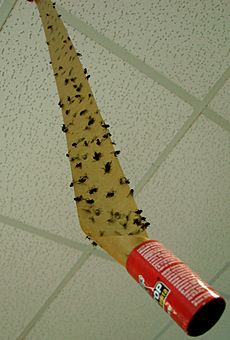 Flypaper (also known as a fly ribbon, fly strip, fly capture tape, or fly catcher) is a fly-killing device made of paper coated with a sweetly fragrant, but extremely sticky and sometimes poisonous substance that traps flies and other flying insects when they land upon it. Fly paper is considered a pest control device, and is subject to regulation in many countries. In the United States of America, it is subject to the Federal Insecticide, Fungicide, and Rodenticide Act.

The poisons used in some older types of flypaper could potentially be toxic to humans and other animals. Historically, metallic arsenic (a well-known toxin to humans) was used in flypaper.

Most modern brands of flypaper contain no poison, but only a non-toxic adhesive such as rosin.

Flypaper is as effective as many other methods involving insecticides or bug zappers. However, a twisted strip of flypaper hanging from the ceiling is considered by many to be aesthetically less acceptable than some other methods, and so flypaper is not as commonly used as it once was. Some formulas for flypaper also have a slight but potentially disagreeable odor. Handling and disposing of flypaper can be awkward because it is so sticky, though vegetable oil can commonly be used to remove the adhesive. Flypaper loses its effectiveness over time when it dries up or becomes covered with dust, and it should be replaced regularly. Consideration should also be given to positioning, as it may be more or less effective in different areas of a room.

All content from Kiddle encyclopedia articles (including the article images and facts) can be freely used under Attribution-ShareAlike license, unless stated otherwise. Cite this article:
Flypaper Facts for Kids. Kiddle Encyclopedia.