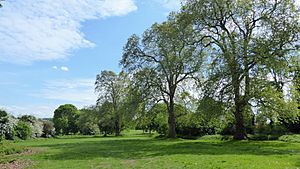 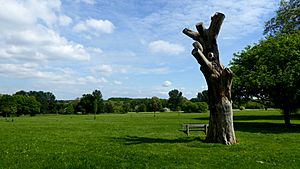 Foots Cray Meadows is an area of parkland and woodland 97 hectares (240 acres) in size, within the London Borough of Bexley, England. It borders the suburbs of Albany Park, Sidcup, Foots Cray, North Cray and Ruxley. The River Cray runs through it in a north-easterly direction. The London Loop, a public recreational walking path around London, also known as the "M25 for walkers", runs through the meadows parallel to the river from Sidcup Place, just south of the meadows. Two notable bridges cross the River Cray in the meadows: Five Arches bridge and the smaller Penny Farthing Bridge.

The Meadows are a Local Nature Reserve and a Site of Metropolitan Importance for Nature Conservation. They have also received a Green Flag Award. There is access from Rectory Lane, among other places. Adjacent to the meadows is what was the kitchen garden and stables which included a boules alley with a summer house which is still standing.

The area was originally a part of the Footscray Place estate, and during the 18th century the Five Arches bridge was built. At the same time, an almshouse was built adjacent to the woods, which, as of 2008, was being excavated by archaeologists belonging to Bexley Archaeological Group.

On 18 October 1949 Footscray Place caught fire and the house was destroyed. The ruins were subsequently demolished and the grounds became Foots Cray Meadows, a public park.

In the early 2000s, Five Arches bridge was renovated with new stone, along with the 'Penny Farthing' bridge just upstream.

All content from Kiddle encyclopedia articles (including the article images and facts) can be freely used under Attribution-ShareAlike license, unless stated otherwise. Cite this article:
Foots Cray Meadows Facts for Kids. Kiddle Encyclopedia.