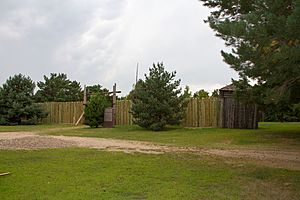 The Forest City Stockade was built in central Minnesota to defend settlers in the area from Indian attacks. It became famous during the Dakota War of 1862. Today, visitors to the site can visit a rebuilt stockade and see volunteers in 1800-style dress illustrate period rituals and activities. A threshing bee takes place across the road in August. The site of the stockade is between Litchfield and Forest City near Minnesota State Highway 24.

The following is a list of those who defended the Forest City Stockade in September 1862 who were mustered in on August 24, 1862 (names noted w/*) and known as the 'Meeker County Volunteers' by August 28, 1862. G. C. Whitcomb claimed to be captain of the group by the captains commission issued by Colonel H. H. Sibley to send 75 Springfield muskets with him (31 were dropped off in Hutchinson, who too were in dire need.)

alarm of the attack Aug 22-3, before Jessie Branham did the same thing.

Brief note of events: August 18, 1862 - news of the Acton Massacre reached Forest City and within the hour, A. C. Smith, J. B Atkinson, Milton Gorton, and a few others headed for Acton, held an inquest, and upon return to Forest City appeared that 'the whole community was in a panic'.

August 19, 1862 - news of the outbreak on the Minnesota River arrives and A. C. Smith prepares a dispatch to the Governor, asking for good guns and ammunition.

August 20, 1862 - At 6am, sends his message to Governor Ramsey with Jesse V. Branham Sr, the only volunteer of 600 people assembled to deliver the message.

August 21, 1862 - At 1am, the message is delivered to Governor Ramsey, who then found George Whitcomb in Saint Paul and gave him the responsibility with 75 muskets and ammunition. Between the 18th and nightfall, 98 teams, mostly double, have left Forest City east to Clearwater, most teams having between five and twelve people with as much goods as they could pack in a moments haste.

August 23, 1862 - At 11am, Whitcomb arrives in Forest City by way of Hutchinson and finds almost everyone had deserted Forest City, and decision was made by the ones who 'Never left Forest City' to stay and save what was worth saving.

August 24, 1862 - a military organization was started, with people coming back after placing family with loved ones elsewhere. The first mission was to go to Kingston on this day and round up horses to use, which they rounded up 33.

August 25, 1862 - 27 men set out west for Monongalia County (northern Kandiyohi County) in pursuit of Indians, but buried seven people, and passed by ruins of three dwellings and a number of mutilated cattle. This expediation [sic] returned August 27, 1862.

August 27, 1862 - 11 men left west to the Manannah-Union Grove area to obtain stoves, bedding, provisions and stock, stopped at Wilmot Maybee's home and had dinner, then to Carlos Caswells, where plans were made to spend the night so they left a yoke of cattle, and proceeded to Silas Caswell's house and put bedding and provisions into the Maybee two horse wagon. At this time, David Hoar, Chancey Wilson, Moody Caswell, Thomas Ryckman, James Nelson, N.C. Caswell, and R.D.C. Cressy set out to recover all the stock they could. Wilmot Maybee and Joseph Page, in Maybee's team, and Phillip Deck and Linus Howe, in Deck's one-horse team, approached the Carlos Caswell residence again, but approximately 15 Indians were waiting, hidden behind a pile of lumber, and shot Page out of the wagon, Deck and Howe were shot at and killed within 350 feet, and Maybee, who ran his team 700 feet before getting cut off, left the team and ran for 500 feet before he was killed. Wilson and Ryckman were close at hand but could not render assistance as their weapons were in the wagons. The party returned to Forest City via Main Prairie, thinking it a safer route, that evening.

August 28, 1862 - 24 men under Lieutenant Atkinson went to the Manannah Massacre scene to bury the dead (three of the four - Maybee was not found until the following spring).

August 30, 1862 - 24 men started for Hutchinson for the 31 guns left there by Whitcomb, but seeing they still needed them, came back August 31 without them.

September 1, 1862 - 17 men and some citizens started for Green Lake on the word there was a family on an island (Green Lake has no islands) but turned back at Swede Grove after a skirmish with the Indians, which two Indians were reportedly killed and soldier Sam Hutchins hit in thigh with a musket ball.

September 2, 1862 - 20 soldiers and 20 citizens set out on the same mission as the day before, when again they retreated at the site of approximately three dozen Indians. During the flight back, O. B. Todd was injured as someone's gun accidentally discharged.

September 3, 1862 - The Forest City Stockade was built by planting a double row of logs on end, three feet into the ground and ten feet protruding out, approximately 120 feet square.

September 4, 1862 - 250 Indians appeared at 3am, and finding the stockade, resorted to burning, random shooting and stealing horses which had not been secured yet. Ten to Twelve Indians were reportedly killed, and one soldier injured, one barn and six houses belonging to Wm Richardson, Milton Gorton, James P. Howlett, Dudley Taylor, A. B. Hoyt, William Richards, and A. C Smith burned. September 15, 1862 - Captain Pettit's Company B 8th Regiment arrived as the first military organization to help in Meeker County.

All content from Kiddle encyclopedia articles (including the article images and facts) can be freely used under Attribution-ShareAlike license, unless stated otherwise. Cite this article:
Forest City Stockade Facts for Kids. Kiddle Encyclopedia.