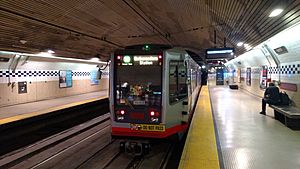 Forest Hill Station was built in a "restrained classical revival" style which has remained largely unaltered to the present. There are also a few decorative features suggestive of an Art Nouveau aesthetic, for example malachite colored accents placed over the elevator doors.

The station consists of two side platforms next to the tracks far below the surface. Forest Hill Station is located deeper underground than any other Muni Metro station; so much so that, unlike other stations, most people use an elevator to reach the platform at Forest Hill. Unlike all other underground Muni Metro stations, which feature an underground concourse mezzanine on the first level down, and the platform on the second level down, Forest Hill's concourse level is in a station building on the surface.

Forest Hill and Eureka Valley stations were originally constructed with low platforms, as streetcars of that era had steps to load passengers from street level. However, the six new Market Street Subway stations, as well as West Portal station, were built with high-level platforms for speedier level boarding onto the new Boeing LRVs. With Eureka Valley permanently closed, Forest Hill was left as the only low-platform station on the Muni Metro subway. Muni later modified the station with high-level platforms, elevators for handicapped access, and ventilation improvements. The $6 million project, which upgraded Forest Hill to equal the new stations while keeping its historic architecture, was completed in 1985.

The station was temporarily closed from June 25 to August 24, 2018, during the Twin Peaks Tunnel shutdown.

All content from Kiddle encyclopedia articles (including the article images and facts) can be freely used under Attribution-ShareAlike license, unless stated otherwise. Cite this article:
Forest Hill station (Muni Metro) Facts for Kids. Kiddle Encyclopedia.