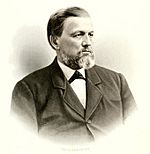 In 1884, Springfielder Orick H. Greenleaf offered 65 acres (26 ha) for the establishment of a park to be named Forest Park. Shortly after, approximately 178 acres (72 ha) were donated by wealthy philanthropist Everett Hosmer Barney. Barney made his fortune as a Civil War arms producer and later as a businessman, inventing clamp-on ice skates and rollerskates. 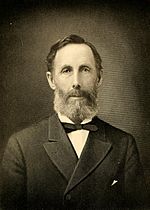 In 1890 Barney built an elaborate, turreted 2+1⁄2-story Victorian mansion on a hill at the west end of his estate, which featured a spectacular view of the Connecticut River and Metro Center Springfield. The mansion's elaborate carriage house still stands, today serving as a restaurant and banquet hall in Forest Park.

To create the parcel of land on which Forest Park was built, Greenleaf and Barney convinced several of their wealthy friends and neighbors to donate much of the remaining land that would ultimately make-up the 735-acre Forest Park. They both became members of the Board of Park Commissioners, which also listed John Olmsted (resigned on March 1, 1886). At the time, much of this land was located in the neighboring suburb of Longmeadow, Massachusetts, (which had separated from Springfield nearly a century before the construction of Forest Park.) Ultimately, Longmeadow ceded complete control of Forest Park to the City of Springfield. In October 2017, Massachusetts Governor Charlie Baker announced that the state would assume the $3 million costs to repair a culvert at the main entrance of the park.

The Barney Mansion was used for Forest Park events until the mid-1950s, when about 50 acres (20 ha) of the park, including 15 acres (6.1 ha) of the former Barney estate, were taken to construct the Springfield/Longmeadow sections of Interstate 91. Barney's house stood atop the hill at the northwest corner of the park, and the highway construction may have threatened its foundations; anticipating that, it was razed. Ultimately, the construction of I-91 severed the Forest Park's connection to the Connecticut River.

The Barney Mansion's stained glass windows were moved to a house in Palmer, Massachusetts where the demolition contractor lived at the time. The mausoleum of Barney's son and a carriage house still survive from the estate, along with many remnants of an extensive arboretum and water gardens planted by Barney around 1900. The developer of the Forest Park neighborhood [1] continued this theme by planting many interesting specimen trees, especially around Magnolia Terrace. This historic neighborhood with many fine examples of Victorian houses abuts the park on the north, while a small enclave of Springfield's stately brick colonial homes and the town of Longmeadow, Massachusetts borders the park to the south.

The ruggedly contoured valley of Pecousic Brook occupies more than half of the south side of the Forest Park. This area has been left largely Naturalist in style, although it features many walking trails and a few elegant bridges. This network of trails includes the Meadowbrook Ravine Trail, accessible near Barney Pond, and is a wide, well-traveled path with outlets to the Forest Park neighborhood of Springfield. For a map of the trails, visit ForestParkMap.

The park is also home to many species of birds and wildlife.

The statue at the Route 5 entrance to Forest Park was created by Peter Wolf Toth and is part of the Trail of the Whispering Giants. The statue represents Omiskanoagwiak.

A statue of a golden retriever, Stone Dog II, currently stands between the park's largest playground and the zoo. The statue is a near replica of an older statue (known by Springfield natives and park patrons as Stone Dog), which went missing from the park in 1987. The original Stone Dog dates back to the late 19th century.

Since 1970, the Environmental Center for Our Schools (or ECOS, as it is commonly called) takes all Springfield public school students in grades four through seven on a two-day environmental learning outing in Forest Park. The headquarters of this organization is located in Forest Park.

During Summer, Camp STAR/Angelina is an inclusive camp for children of all abilities, ages 3 to 22 years old. Some of the special needs populations the camp has worked with include: developmental delays, ADD/ADHD, emotional problems, learning disabilities, and visual and hearing impairments. Camp STAR/Angelina is a 6-week summer program. The camp is located on the outskirts of Forest Park off Trafton Road and activities include swimming, sports, games, crafts, field trips and an end of camp variety show.

Bright Nights at Forest Park is a national attraction during the Christmas and Chanukah seasons. Bright Nights is a lighting spectacle that features time and color coordinated lighting exhibits. Trees and sculptures are decorated to look like various scenes and characters, including many from the works of Springfield native Dr. Seuss. Many scenes are animated; others are simply decorative. One of the spectacles' most elaborate exhibits is a replica of Everett Barney's mansion. Viewers in automobiles queue up to drive for approximately 2 miles along a meandering path through the park to see the displays. Each year Bright Nights changes and becomes more elaborate. [2]

All content from Kiddle encyclopedia articles (including the article images and facts) can be freely used under Attribution-ShareAlike license, unless stated otherwise. Cite this article:
Forest Park (Springfield, Massachusetts) Facts for Kids. Kiddle Encyclopedia.