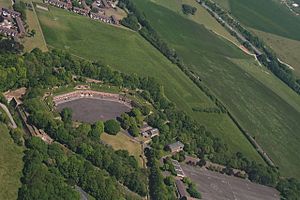 Fort Burgoyne from above

Fort Burgoyne, originally known as Castle Hill Fort, was built in the 1860s as one of the Palmerston forts around Dover in southeast England. It was built to a polygonal system with detached eastern and western redoubts, to guard the high ground northeast of the strategic port of Dover, just north of Dover Castle. The fort is named after the 19th century General John Fox Burgoyne, Inspector-General of Fortifications and son of the John Burgoyne who fought in the American Revolutionary War.

The Land Trust now own the fort, and are restoring it for public access. 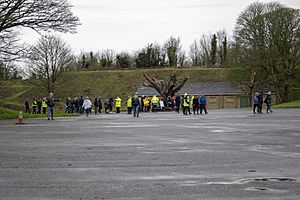 On the 29 February 2020, Fort Burgoyne was opened to the public for a day. The event was called Waking the Giant and was run by Albion Inc, as part of a commission for Pioneering Places East Kent to map out the future uses of the fort. The event featured: The Museum Of British Folklore, Weaving & Knitting by Robert George Sanders & Katherine Woodward, Blacksmithing by Michael Hart, Ceramics by Ceramic Art Dover & Keith Brymer-Jones, A showing of the film Fortopia By Matt Rowe, a demo of the virtual reality game Escape created by Jake Price, A presentation of future fort use by Central St. Martins, A Makers Market by Future Foundry and Food & Drink by The White Cliffs & Real Deal Roasters.

The event was considered a success by Albion, Inc. and Pioneering Places East Kent, with an estimate of over 2000 people in attendance.

All content from Kiddle encyclopedia articles (including the article images and facts) can be freely used under Attribution-ShareAlike license, unless stated otherwise. Cite this article:
Fort Burgoyne Facts for Kids. Kiddle Encyclopedia.