Fort Green Mill is a tower mill at Aldeburgh, Suffolk, England which has been converted to residential accommodation. 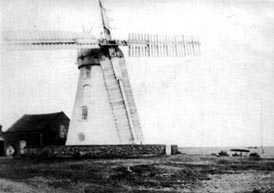 Fort Green Mill was built in 1824. It was converted into a house in 1902. During the Second World War it was used as a gun emplacement.

Fort Green Mill is a four-storey tower mill. It had four patent sails and the domed cap was winded by a fantail. It had two pairs of millstones. A photograph of the working mill (above) shows that the sails were double patents carried on a cast-iron windshaft and the fantail had six blades. 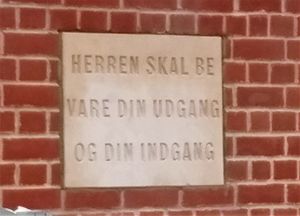 There is an inscription, formerly above one of the doors, now on a wall "Herren skal bevare din udgang og din indgang". It means "The Lord shall preserve thy going out and thy coming in," Psalm 121 verse 8.

All content from Kiddle encyclopedia articles (including the article images and facts) can be freely used under Attribution-ShareAlike license, unless stated otherwise. Cite this article:
Fort Green Mill, Aldeburgh Facts for Kids. Kiddle Encyclopedia.