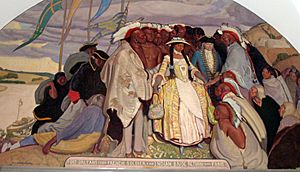 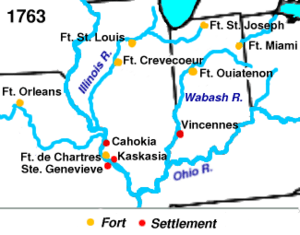 Fort Orleans (sometimes referred to Fort D'Orleans) was a French fort in colonial North America. It was the first fort on the Missouri River built by any Europeans on the Missouri River. It was built near the mouth of the Grand River near present-day Brunswick. The fort was occupied from 1723–1726. It was the first multi-year European settlement in what is today the U.S. state of Missouri.

The fort was built on November 9, 1723. 40 French soldiers were supposed to be there.

All content from Kiddle encyclopedia articles (including the article images and facts) can be freely used under Attribution-ShareAlike license, unless stated otherwise. Cite this article:
Fort Orleans Facts for Kids. Kiddle Encyclopedia.