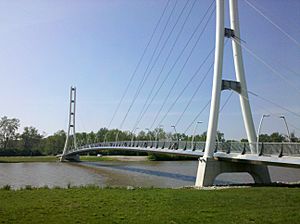 Pedestrian bridge on the St. Joseph River at the Northern end of St Joseph Pathway near IPFW.

The Rivergreenway is the backbone of burgeoning Fort Wayne Trails network in Fort Wayne, Indiana and the surrounding area. The Rivergreenway consists of nearly 25-miles of connected trails through a linear park following alongside or near the City's three rivers: St. Joseph River, St. Marys River, and Maumee River. In 2009, the Rivergreenway was designated as a National Recreation Trail. The trail network also connects to the Wabash & Erie Canal Towpath Trail. In 2011, the Wabash & Erie Canal Towpath Trail was completed, the Greater Fort Wayne has 50 miles of connected trails.

The Rivergreenway originates at the confluence of the three rivers meet in downtown Fort Wayne at the water filtration plant. This is considered the zero-mile marker for the St. Joseph, St. Marys and Maumee Pathways.

All content from Kiddle encyclopedia articles (including the article images and facts) can be freely used under Attribution-ShareAlike license, unless stated otherwise. Cite this article:
Fort Wayne Rivergreenway Facts for Kids. Kiddle Encyclopedia.