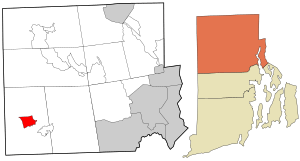 Location of the CDP in Providence County and the state of Rhode Island.

Foster Center is a village in the town of Foster, Rhode Island, United States. It was listed as a census-designated place (CDP) in 2010, with a population of 355. Historic elements of the village are included in the Foster Center Historic District, which is listed on the National Register of Historic Places. The district features various colonial and Greek Revival houses as well as the still functioning town building from the late 18th century. The district was added to the National Register of Historic Places on May 11, 1974.

All content from Kiddle encyclopedia articles (including the article images and facts) can be freely used under Attribution-ShareAlike license, unless stated otherwise. Cite this article:
Foster Center, Rhode Island Facts for Kids. Kiddle Encyclopedia.