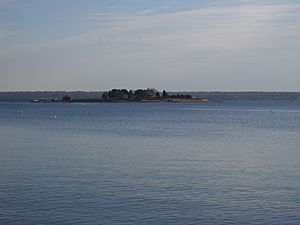 Fox Island in 2008 from North Kingstown

Fox Island is an island in Narragansett Bay, Rhode Island, in the United States of America. It lies between Conanicut Island and North Kingstown just south of the village of Wickford, Rhode Island. The island is a part of the town of North Kingstown. The Native Americans called the island "Nanaquonset" (also "Nonequasset" or "Sonanoxet.") The island was purchased from Native Americans by Randall Holden and Samuel Gorton in 1659. In the 1860s a Christian preacher named Captain Jimmie Hammond became the first full-time resident of the island where he lived with his chickens and cat. In 1880, Rev. William Pendleton Chapman, a pastor at the nearby Quidnessett Church, featured the island in his adventure book titled “Budd Boyd’s Triumph: The Boy Firm of Fox Island.” Various other private owners have owned the island since its first habitation. Since 2000 it has been privately owned by a corporation which uses a large wind generator on the east side of the island.

All content from Kiddle encyclopedia articles (including the article images and facts) can be freely used under Attribution-ShareAlike license, unless stated otherwise. Cite this article:
Fox Island (Rhode Island) Facts for Kids. Kiddle Encyclopedia.