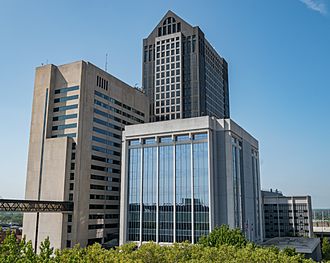 The tallest building in the complex is the 27-floor, 464-foot (141 m) Franklin County Courthouse at 373 South High Street. It is the seventh tallest building in Columbus. This was the third incarnation of the Franklin County Courthouse and hosts the majority of the county government agencies. It was designed by architectural firm DesignGroup, Inc. following the postmodern architectural style.

The Hall of Justice at 369 South High Street began a two-year renovation in early 2013.

Other facilities in the complex include:

A large cast of Henry Moore's Oval with Points, originally installed in Dorrian Commons Park, was moved across High Street in 2014 to the plaza of the newly-remodeled Hall of Justice. The 1974 statue of Benjamin Franklin was then moved from the plaza to an interior lobby in the courthouse.

All content from Kiddle encyclopedia articles (including the article images and facts) can be freely used under Attribution-ShareAlike license, unless stated otherwise. Cite this article:
Franklin County Government Center Facts for Kids. Kiddle Encyclopedia.