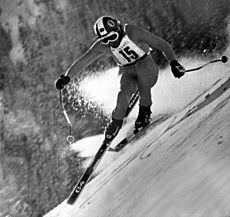 Klammer winning at Kitzbühel in 1976

Franz Klammer (born 3 December 1953) is a former champion alpine ski racer from Austria. Klammer overwhelmingly dominated the downhill event for four consecutive World Cup seasons (1975–78). He was the gold medalist at the 1976 Winter Olympics in Innsbruck, winning the downhill at Patscherkofel by a margin of 0.33 seconds with a time of 1:45.73. He won 25 World Cup downhills, including four on the Hahnenkamm at Kitzbühel. He holds the record for the most victories (four) on the full course at Kitzbühel.

Born into a farming family in Mooswald, community Fresach, Carinthia, and like many alpine farm boys, Klammer skied to school each winter day. His home village did not have any ski lifts, so as a child he climbed up the pasture behind his house to ski downhill. Klammer started racing at the relatively late age of 14, competing in the winter whilst working on the family farm during the summer after he dropped out of school. He had a tough struggle to make the Austrian ski team, traditionally dominated by the states of Tyrol and Salzburg. He made his World Cup debut at the age of 19 in 1972 at the Val Gardena downhill: he finished ninth in the training run for the race, but could only manage 32nd place on race day due to nerves. He spent 13 seasons on the World Cup circuit, from December 1972 to March 1985.

Klammer is married to Eva since 1979: the couple met in 1975 when he was in Tunisia at a fitness camp with the Austrian ski team. They have two daughters, Sophie and Stephanie.

Klammer first showed signs of promise in the second half of the 1973 World Cup season, finishing second in the St. Anton downhill behind Bernhard Russi of Switzerland, the reigning Olympic and World Cup downhill champion. Klammer, age 19, followed this up with a third at St. Moritz and a third in the giant slalom at Mont Sainte-Anne (the only time he finished on the podium in a World Cup Giant Slalom in his career). The following season he finished second in the downhill standings behind Roland Collombin of Switzerland, his nemesis that season. After beating Collombin and Russi at Schladming in December 1973 under terrible conditions, Collombin bested him at Garmisch, Avoriaz, and Wengen. In December 1974, Collombin fell at Val-d'Isère, as he had the previous year. This time Collombin broke his back in a training run, unfortunately ending his promising career. Klammer won that race and every other downhill that 1975 season, except Megève, where one of his skis came off; without this incident, he would have won the overall World Cup title in March 1975, due to a good slalom result two days before at Chamonix, which would have granted him at least a third place (15 points) for the AK-combined of slalom Chamonix / downhill Megève. In the Olympic test event at Patscherkofel at Innsbruck in January 1975, Klammer had defeated defending Olympic champion Bernhard Russi of Switzerland, the runner-up, by nearly a half-second.

Entering the 1976 Winter Olympics, the 22-year-old Klammer was the favorite to take the gold medal in the downhill at Innsbruck in his native Austria. He was the defending World Cup downhill champion, and had won the three previous downhills in January at Wengen, Morzine, and Kitzbühel, and also won the previous year's race on the same Patscherkofel course. Starting in 15th position, Klammer was the last of the top seeds, and knew that Russi had set a blistering pace and led by over a half-second. Klammer took heavy risks on the treacherous piste, skied on the edge of disaster, and won by 0.33 seconds to the delight of the Austrian fans. A dozen years earlier on the same course in 1964, Egon Zimmermann posted a 2:18.16 to win the gold medal; Klammer's 1:45.73 was more than thirty two seconds faster.

Although he dominated the downhill event in World Cup competition, the overall title remained elusive, because the technical specialists had two events in which to earn points (slalom & giant slalom) whereas a speed specialist had only one. The second speed event, the Super-G, was not a World Cup event until December 1982, at the twilight of Klammer's World Cup career.

At the end of the 1975 season, despite having won 8 of 9 downhills, he finished third for the overall World Cup title. The final event was a parallel slalom and Klammer lost in the first round. Italy's Gustav Thöni defeated Sweden's Ingemar Stenmark in the finals and won his fourth overall title in five years; Klammer finished fourth overall in 1976, third in 1977, and fifth in 1978.

After his fourth consecutive season title in downhill in 1978, he began a prolonged slump until the end of the 1981 season. He may have been affected by his brother's spinal cord injury in a downhill race, as well as a change of ski supplier (from Fischer to Kneissl). Unable to make the strong four-member Austrian downhill team for the 1980 Olympics, Klammer could not defend his Olympic title at the 1980 Winter Olympics in Lake Placid. Rather than retire, he worked long and hard at a comeback; finally in December 1981, after another ski change from Kneissl to Blizzard, he won at Val-d'Isère. The following season he regained the World Cup Downhill title, his fifth, followed by the 1984 victory at Kitzbuehel, his fourth on the Hahnenkamm. At the 1984 Olympics in Sarajevo, (then Yugoslavia, now Bosnia), Klammer finished a disappointing tenth on a less-than-challenging course on Bjelašnica. The race was won by the brash Bill Johnson of the U.S., an excellent glider[clarify], who had recently won his first World Cup race on a shortened course at Wengen. Johnson had promising training runs and publicly predicted his Olympic victory. Klammer had been involved in a controversy with Johnson when he described him to a teammate as a "nasenbohrer" after he won a race earlier in the season. The term is slang in some German speaking areas for a rookie but its literal translation is "nose picker."

At his peak (Wengen 1976 to Wengen 1977), Klammer won ten consecutive downhills, including the spectacular, pressure-laden win at the 1976 Olympics. He won 8 of 9 during the 1975 season and also won 19 of 23, 20 of 26 and 21 of 29 downhills. His career total is 26 downhill wins: 25 World Cup and 1 Olympic. These achievements mark him as arguably the greatest downhill racer ever: Karl Schranz achieved 20 wins over an extended career while Klammer won 19 in less than three seasons.

In an interview with Austrian television in 2006, the 52-year-old Klammer was asked about his greatest achievement. He answered that although his gold medal at the Olympic Games in Innsbruck was generally regarded as his greatest career achievement, winning at Kitzbühel in 1984 meant something very special to him, considering he hadn't won there in seven years.

Immediately after his retirement from alpine competition, Klammer took up motor racing, and was soon involved in touring car racing, driving Mercedes-Benz saloons all over Europe and racing professionally as far away as Australia. In 1990, Klammer won a round of the prestigious European Touring Car Championship.

Klammer was a hero to Austrian ski racing fans and also to fans the world over for doing a great deal to promote the popularity of alpine ski racing. He is known as "The Kaiser" and also as the "Klammer Express."

In a 2015 interview with Graham Bell for the Daily Telegraph, Klammer attributed his success to being the first downhiller to carve a whole turn from start to finish, contrasting his style with skiers of the previous generation such as Karl Schranz and Jean-Claude Killy who would skid at the start of a turn before engaging in a carve.

In an interview with Tom Brokaw that aired on NBC on February 13, 2010, as part of their 2010 Winter Olympics coverage, American Olympian Bode Miller cited Klammer's style and approach to ski racing as a major source of inspiration for him.

Inspired by his younger brother Klaus, who was paralysed from the waist down after a crash in a downhill at the age of 16, Klammer has established the Franz Klammer Foundation, which benefits seriously injured athletes.

^ Klammer was an alternate on the 1980 team and did not compete.

All content from Kiddle encyclopedia articles (including the article images and facts) can be freely used under Attribution-ShareAlike license, unless stated otherwise. Cite this article:
Franz Klammer Facts for Kids. Kiddle Encyclopedia.