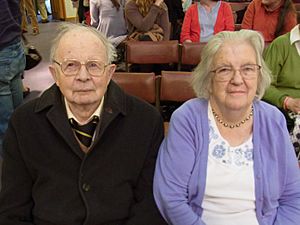 Catherwood was born at Castledawson, County Londonderry, Northern Ireland. He was educated at Shrewsbury School and Clare College, Cambridge.

He was former Director General of the National Economic Development Council, and president of the Evangelical Alliance.

He married Elizabeth, the daughter of Christian pastor and author Martyn Lloyd-Jones. Their son Christopher Catherwood is an author. Fred Catherwood died in Cambridge, England on 30 November 2014 at the age of 89.

All content from Kiddle encyclopedia articles (including the article images and facts) can be freely used under Attribution-ShareAlike license, unless stated otherwise. Cite this article:
Fred Catherwood Facts for Kids. Kiddle Encyclopedia.