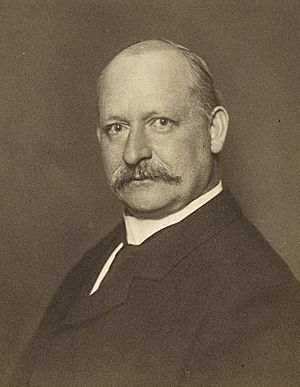 F.P. Treadwell studied chemistry in Heidelberg (Germany) under Robert Bunsen. He graduated with a doctoral degree in 1878 and was lecture assistant to Bunsen from 1878-1881. Treadwell became Privatdozent in analytical chemistry at ETH Zürich in 1882, Titularprofessor in 1885, and Ordinarius (full professor) in 1893, a post he held until his sudden death by "heart disease" in 1918. His son William Dupré Treadwell followed him on his position at ETH.

In 1882, he had already published a widely recognized reference work with Victor Meyer (1848–1897), called Tables for Qualitative Analysis. But F.P. Treadwell was especially well known for his textbook of analytical chemistry. The "Treadwell" was in common use in Universities, with editions spanning up to 1949. It was translated into French, Italian, English, Serbo-Croat, and Spanish. Later editions were edited by his son W.D. Treadwell.

All content from Kiddle encyclopedia articles (including the article images and facts) can be freely used under Attribution-ShareAlike license, unless stated otherwise. Cite this article:
Frederick Pearson Treadwell Facts for Kids. Kiddle Encyclopedia.