The main candidates were Nicolas Sarkozy from the Union for a Popular Movement, François Hollande from the Socialist Party, Marine Le Pen from the National Front, Jean-Luc Mélenchon from the Left Front, François Bayrou from the Democratic Movement, Eva Joly from The Greens, Nicolas Dupont-Aignan from Debout la France, Philippe Poutou from the New Anticapitalist Party, Nathalie Arthaud from Lutte Ouvrière and Jacques Cheminade from Solidarity and Progress.

On 22 April 2012, François Hollande won 29% of the vote with Nicolas Sarkozy winning 27%. Both candidates advanced to the second round of the election, which Hollande later won with 52% of the vote. 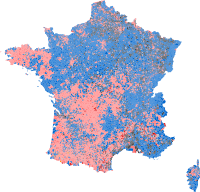 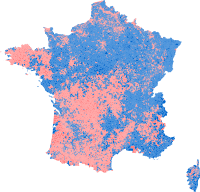 Results by commune for the 2nd round of French presidential elections, 2012.      François Hollande     Nicolas Sarkozy

All content from Kiddle encyclopedia articles (including the article images and facts) can be freely used under Attribution-ShareAlike license, unless stated otherwise. Cite this article:
2012 French presidential election Facts for Kids. Kiddle Encyclopedia.