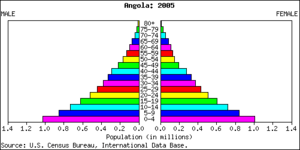 Example of an (absolute) frequency distribution. This is the population pyramid of Angola, for the year 2005. 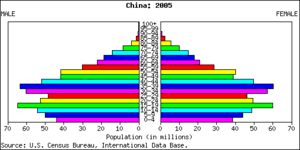 This is the population pyramid of China for the year 2005.

In statistics, a frequency distribution is a list of the values that a variable takes in a sample. It is usually a list, ordered by quantity. It will show the number of times each value appears. For example, if 100 people rate a five-point Likert scale assessing their agreement with a statement on a scale on which 1 denotes strong agreement and 5 strong disagreement, the frequency distribution of their responses might look like:

This simple table has two drawbacks. When a variable can take continuous values instead of discrete values or when the number of possible values is too large, the table construction is difficult, if it is not impossible. A slightly different scheme based on the range of values is used in such cases. For example, if we consider the heights of the students in a class, the frequency table might look like below.

Managing and operating on frequency tabulated data is much simpler than operation on raw data. There are simple algorithms to calculate median, mean (statistics), standard deviation etc. from these tables.

Statistical hypothesis testing is based on the assessment of differences and similarities between frequency distributions. This assessment involves measures of central tendency or averages, such as the mean and median, and measures of variability or statistical dispersion, such as the standard deviation or variance.

Frequency distributions are also used in frequency analysis to crack codes and refer to the relative frequency of letters in different languages.

All content from Kiddle encyclopedia articles (including the article images and facts) can be freely used under Attribution-ShareAlike license, unless stated otherwise. Cite this article:
Frequency distribution Facts for Kids. Kiddle Encyclopedia.