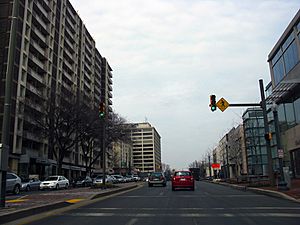 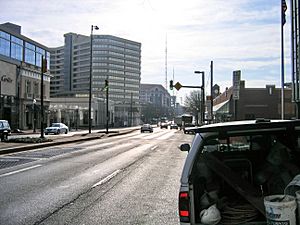 There were 2,995 households, out of which 6.1% had children under the age of 18 living with them, 28.4% were married couples living together, 3.9% had a female householder with no husband present, and 66.5% were non-families. 61.3% of all households were made up of individuals, and 25.3% had someone living alone who was 65 years of age or older. The average household size was 1.51 and the average family size was 2.31.

Although not an incorporated municipality, the Village of Friendship Heights was established as a Special Tax District in 1914. Its boundaries—Wisconsin Avenue, Willard Avenue, and Somerset Terrace—enclose 34 acres (140,000 m²) and is almost entirely occupied by high-rise residential buildings. It has the highest population density of any census designated place or city in the United States. In fact, its density exceeds the borough of Manhattan. The 2010 population of Friendship Village Heights was 4,698, giving it a population density of 88,432 per square mile, versus Manhattan's approximate 70,000.

The village is governed by a seven-member village council; each member is elected to a two-year term.

In 2000, the village gained national attention when it sought to ban smoking in all public spaces maintained by the local government. The ban, considered one of the strictest in the nation, went into effect December 12, 2000, but it was voided by a judge on March 2, 2001, who said the village did not have the authority to enact such a ban, as it is a special tax district and not an incorporated municipality.

From 1971 to 1974, Erlebacher's ladies specialty store was located in the Holiday Inn Plaza shopping mall at 5512 Wisconsin Avenue.

All content from Kiddle encyclopedia articles (including the article images and facts) can be freely used under Attribution-ShareAlike license, unless stated otherwise. Cite this article:
Friendship Village, Maryland Facts for Kids. Kiddle Encyclopedia.