Hakea sulcata, commonly known as furrowed hakea, is a plant in the family Proteaceae that is endemic to Western Australia. It is a prickly shrub with grooved, cylindrical leaves, sweetly-scented flowers and relatively small fruit. 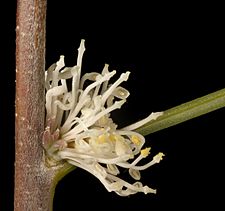 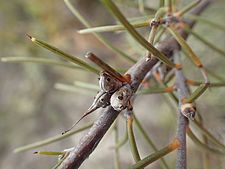 Hakea sulcata is a small spreading or upright shrub that grows to a height of 0.4 to 2 metres (1 to 7 ft) and does not form a lignotuber. The branchlets are either thickly or sparsely covered in flattened soft silky hairs at flowering time. The leaves are needle-shaped, thick, pentagonal in cross-section, more or less 2–12.5 cm (0.8–5 in) long and 1–2 mm (0.04–0.08 in) in diameter and grow alternately on the branchlets. The leaves have 6 or 7 shallow longitudinal grooves and end in a sharp point. The leaves occasionally vary in shape, they may be linear, narrowly egg-shaped, flat or concave with prominent veins. The inflorescence consists of 8-14 white, sweetly scented flowers is a single raceme in clusters in the leaf axils or on old wood. The cream-white pedicels are smooth, the perianth cream-white and the pistils 5–9.5 mm (0.20–0.37 in) long. The egg-shaped fruit are the smallest in the genus less than 0.6–0.8 cm (0.2–0.3 in) long and 0.3–0.35 cm (0.12–0.14 in) wide. The surface is generally smooth or slightly warty becoming rough with age and end in a point.

Hakea sulcata was first formally described by Robert Brown in 1810 and published the description in Transactions of the Linnean Society. Named from the Latin sulcatus - grooved, referring to the leaf structure.

Furrowed hakea is endemic to an area in the South West, Great Southern and the Goldfields-Esperance regions of Western Australia from Gingin in the north to Albany in the south, Augusta in the west and Esperance in the east. It grows in sandy or clay soils over or around areas of laterite.

Hakea sulcata is classified as "not threatened" by the Western Australian Government Department of Parks and Wildlife.

All content from Kiddle encyclopedia articles (including the article images and facts) can be freely used under Attribution-ShareAlike license, unless stated otherwise. Cite this article:
Furrowed hakea Facts for Kids. Kiddle Encyclopedia.