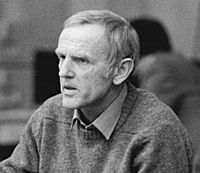 He trained as a librarian and worked at the Zentralinstitut für Bibliothekswesen (Central Institute for Library Knowledge) in East Berlin from 1953 to 1961. From 1965 to 1978, he was a member of the Zentralvorstandes des Schriftstellerverbandes der DDR (Central Executive Committee of the Literary Association of East Germany).

All content from Kiddle encyclopedia articles (including the article images and facts) can be freely used under Attribution-ShareAlike license, unless stated otherwise. Cite this article:
Günter de Bruyn Facts for Kids. Kiddle Encyclopedia.