G-Force: Guardians of Space (1986) is the second American animated television adaptation of the Japanese anime series Science Ninja Team Gatchaman (1972), following Sandy Frank Entertainment's initial 1978 effort Battle of the Planets and preceding ADV Films' 2005 attempt, known merely as Gatchaman. With G-Force, Sandy Frank Entertainment collaborated with Turner Broadcasting to create a newer, more faithful translation of Science Ninja Team Gatchaman for a new audience, and such a translation was made possible with the relaxed television standards of the 1980s, a luxury that the more Star Wars-themed Battle of the Planets did not enjoy.

In the show, five brave teenagers — Ace Goodheart, Dirk Daring, Agatha June, Pee Wee and Hoot Owl battle the aliens Galactor and Computor for the fate of the planet Earth.

During the early-to-mid 1980s, Sandy Frank Entertainment's Battle of the Planets (or BotP) was gradually being phased off the air after a successful number of years in syndication. Television stations began relegating the show to early morning timeslots (as typically done with programming on its way off the air) before dispensing of it altogether. During this period Ted Turner's cable network TBS (then known as "SuperStation WTBS") also aired the show on their channel (albeit in a slightly more edited form, with cuts for time constraints), and by 1984, WTBS was more or less the exclusive home of BotP before they too dispensed of it around 1985, effectively ending the lengthy run of Battle of the Planets on U.S television.

With Battle of the Planets having run its course, Sandy Frank, still holding the domestic rights to the first Gatchaman series, continued to market BotP wherever they could while seeking ways to continue making use of their license. Interest came from the part of Turner Broadcasting (who was the last to air BotP on a wide scale on their TBS network) in creating a newer, more faithful adaptation of Gatchaman, which would be easier to accomplish with the newly relaxed television standards of the Reagan era-1980s. Turner executives believed that the series still had potential, and in turn acquired the rights from Sandy Frank to begin work on what would come to be known as G-Force (the same title given to the collective group of protagonists in Battle of the Planets, which in turn would be used for the same purpose on the new version).

To develop this project, Turner enlisted the help of Fred Ladd, a pioneer in the field of translating and distributing Japanese animation in the U.S (with famous works such as Astro Boy, Gigantor & Kimba the White Lion, under his belt) to produce the adaptation. Ladd had previously been offered to produce Battle of the Planets by Sandy Frank himself a few years before, but passed on the offer due to location conflicts; Ladd was working out of New York City at the time, while BotP was being produced in California. Ladd, through his production company "Sparklin' Entertainment", put together two "test" pilot episodes chosen by Turner (see Episode order), and sent them in for approval. Within days, Ladd and his company were given the greenlight to produce the adaptation, and work on G-Force began in the fall of 1986. Despite it being handled by Turner & Fred Ladd, Sandy Frank ultimately held the copyrights to the show (along with international distribution rights), while Turner, through its subsidiary Turner Program Services, and King Features Entertainment (a subsidiary of Hearst Corporation; now Hearst Entertainment) held limited distribution and syndication rights.

Changes and additions in the adaptation 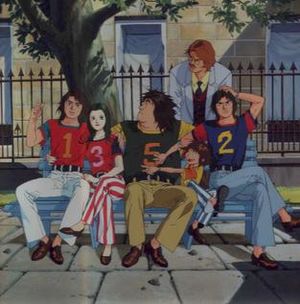 Dr. Benjamin Brighthead with the members of his G-Force organization in their civilian clothing

An all-new music score was composed (by composer Dean Andre) for G-Force. The score retained some of the original, 1970s Gatchaman score.

The silent parts of the Gatchaman soundtrack were filled in with additional music, also composed by Dean Andre. This was a relatively common practice, purportedly to maintain the pace of the show and prevent the audience from losing interest during a lull in action. Battle of the Planets had used this practice, composing new scores as well as reusing the existing Gatchaman music, during silent moments such as mecha transformations (which originally had a high-pitched warping sound effect synchronized with the light beams) and the completely musicless scenes where Katse talked with Sosai X. G-Force: Guardians of Space opted to use a sole, repetitive synth instrumental that would play on and off as the Gatchaman score faded in and out. This synth instrumental is actually a stripped-down rendition of the show's opening/ending theme and is played throughout every episode of the series.

Unlike Battle of the Planets, which bounced around the Gatchaman episode order and adapted them as the producers saw fit, G-Force followed the original Gatchaman episode order for its entire run, only skipping Gatchaman episodes 81 (due to intense content, also skipped in BotP) and 86 (for unknown reasons) for a total of 85 dubbed episodes (the same number of episodes adapted for Battle of the Planets coincidentally). The final 18 episodes of Gatchaman (episodes 88-105) were not adapted for G-Force either, which resulted in this adaptation lacking a proper conclusion. The reasons behind this decision are not exactly known; some sources claim that only 85 episodes were contracted and bought for this adaptation while others claim that budget constraints or lack of interest in adapting the remaining episodes cut it short. Also to be taken into consideration is the fact that the Gatchaman series became increasingly darker towards its end, which would have made adapting those last episodes difficult, given that G-Force was being marketed towards children. It was not until ADV Films' uncut and unedited release of the first Gatchaman series in 2005-2006 that all 105 episodes were adapted and available in English.

Episodes 18 ("The Whale Submarine") and 87 ("Galactor's Deadly Trap") of G-Force served as the two pilots for the show. They were put together by producer Fred Ladd before he had been given approval to work on the rest of the series, with the purpose being to demonstrate (to Turner Broadcasting) what his work on the show would look and sound like. The two pilots are unique amongst the rest of the episodes for having replaced all of the original Gatchaman music with new music composed by Dean Andre, which was part of the proposed, all-new music score for the show. Due to time constraints, the new pieces of music weren't utilized beyond the pilots and left on the cutting room floor, with the rest of the episodes retaining most of the original Gatchaman score. Incidentally, most of the new music that was exclusively played in the pilots also turned out to be variations of the show's opening/ending theme. There exist earlier, unaired versions of the pilot episodes which contain a radically different music score than even the broadcast versions of the pilots. They also contain an unused opening/closing theme, which along with the aforementioned score was also left on the cutting room floor in favor of the final music selection present in the broadcast episodes. These "pre-production" pilot episodes are only available as extras on the Region 4 (PAL) Battle of the Planets: Collection 2 DVD set.

Between the efforts of both Battle of the Planets and G-Force, 99 of Gatchaman's 105 episodes were adapted. Incidentally, the last six untranslated episodes were very crucial to the series' overall storyline, serving as the series's finale. As previously mentioned, ADV Film's uncut Gatchaman release finally adapted all 105 episodes into English, more than 30 years after the show first aired and almost 30 years since its first English adaptation.

On the creative side, the original Gatchaman character names and terms were once-again re-tooled and Americanized in G-Force for the convenience of the English-speaking market, as they first were with Battle of the Planets years earlier. Despite the existence of BotP's set of English names and terms, G-Force's producers came up with their own set in an attempt to stray away from the previous adaptation as much as possible and avoid any potential confusion between the two. From Battle of the Planets to G-Force, the heroes' names were changed to Ace Goodheart (Mark), Dirk Daring (Jason), Agatha June (Princess), Pee Wee (Keyop), Hoot Owl (Tiny), and Dr. Brighthead (Chief Anderson), while the main villains were renamed Galactor (Zoltar) and Computor (The Great Spirit) respectively. The only terms retained from BotP were the name of the group as a collective ("G-Force", in order to explain the "G" on their costumes and vehicles) and the team's ship ("Phoenix"). 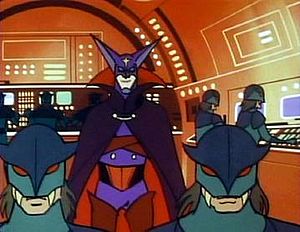 Galactor and his army of soldiers.

(NOTE: The show's voice actors were originally uncredited in its credits list.)

The renaming of the various characters and terms in G-Force are highlighted as follows (in correspondence to their Gatchaman equivalents, among others):

Other character variations across different versions

All content from Kiddle encyclopedia articles (including the article images and facts) can be freely used under Attribution-ShareAlike license, unless stated otherwise. Cite this article:
G-Force: Guardians of Space Facts for Kids. Kiddle Encyclopedia.