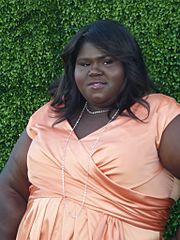 Gabourey "Gabby" Sidibe (born May 6, 1983) is an American movie and television actress who started her career in the 2009 movie Precious as Claireece "Precious" Jones, for which she won many awards and was nominated for an Academy Award.

Sidibe was born on May 6, 1983 in Bedford–Stuyvesant, Brooklyn, New York City. She studied at Borough of Manhattan Community College, at City College of New York, and at Mercy College.

All content from Kiddle encyclopedia articles (including the article images and facts) can be freely used under Attribution-ShareAlike license, unless stated otherwise. Cite this article:
Gabourey Sidibe Facts for Kids. Kiddle Encyclopedia.