Galaxias supremus, the Kosciuszko galaxias, is a galaxiid of the genus Galaxias, a member of the Mountain Galaxias species complex group of freshwater fish, found in Australia.

Light brown to tan over body and head and generally lighter below the lateral line with the belly even lighter. Base colour overlain by medium to large darker, uneven blotches mostly joining together to form irregular bands, sometimes also overlain with a shading of tiny, closely packed dark grey spots. Occasionally very small black bars are present mixed in with the blotches and spots around the mid body. Gill covers light brown with a medium sized gold patch. Eye small with a golden iris. A thin band of gold spots sometime present on the upper surface between the nape and the dorsal fin. Head covered with a scattering of diffuse gold flecks and the body from behind the pectoral fins to the caudal peduncle has a band of gold to coppery spots concentrated mostly below the lateral line and towards the rear of the fish. 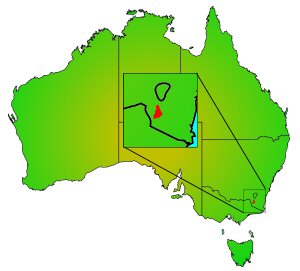 Not well known, reported only from Blue Lake and its tributary Carruthers Creek in the headwaters of the Snowy River system on Mount Kosciuszko within Mount Kosciuszko National Park in New South Wales and at an elevation of 1,900–1,950 metres (6,230–6,400 ft). Changes to the historical distribution are unknown but the presence of alien trout in the upper reaches of the Snowy River and within 2 km of the Blue Lake system is considered to be a restricting factor on G. supremus's range.

The Kosciusko Galaxias is found in cold water in small clear streams and one on-stream lake (Blue Lake). Stream width was 0.6–1.1 metres (2.0–3.6 ft) and depth was 50–60 centimetres (20–24 in). Stream beds consist of bedrock and boulder, through to gavel and sand, the lake bed consists of pebble, gravel and silt. Able to withstand very cold water below 2 °C (36 °F) for lengthy periods. All these waters are covered with snow and ice for long periods of time during winter. Fish have been collected mainly from pools in streams amongst rock, undercut banks and overhanging grasses. In the lake, fish were collected from rocks and small cobble within 2 metres (6.6 ft) of the shore. The species' location and habitat in deeper waters of the lake is unknown.

Confined to freshwater, with an unknown spawning period likely to be late spring to early summer. Adult fish collected in mid March were found to have mid stage gonad development.

All content from Kiddle encyclopedia articles (including the article images and facts) can be freely used under Attribution-ShareAlike license, unless stated otherwise. Cite this article:
Galaxias supremus Facts for Kids. Kiddle Encyclopedia.