Galong is a village in New South Wales, Australia, in Hilltops Council. At the 2011 census, the Galong State Suburb (an Australian Bureau of Statistics statistical area), that includes the village, had a population of 338. 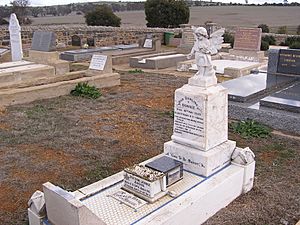 A monument for a child at the cemetery

The town is well known for its cemetery, which has among other monuments, some angels erected by Frank Rusconi, the monumental mason from Gundagai. 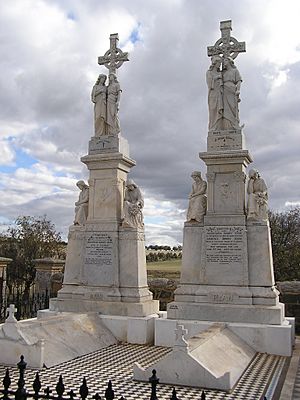 The major industry in the town is the limestone open-cut mine. The Galong deposit was first mined in 1885 with significant mining activity in the 1920s producing burnt lime or quicklime, which is used in the production of cement. The mine re-opened in the 1960s and again in 1994. In 2001, the lease was altered to extend the mineable area of land from 16 to 160 hectares (40 to 395 acres); resources of 20 million tonnes of limestone have been defined within the proposed limit of mining. In 2003, the mine was acquired by Boral. It now produces lime for agricultural lime used for farming canola and grains; agricultural lime is used for remediating soil acidity, a major problem threatening the productivity and sustainability of agriculture in many parts of the state. It produces approximately 300,000 tons per year, about one quarter of the requirements for the state of New South Wales. Apart from agricultural purposes, a major consumer of lime from Galong is the Port Kembla steel works. A kiln was built at the mine in 2003/04 to allow the production of quicklime for use in cement. The mine employs about 19 people.

Squatter and former Irish convict 'Ned' Ryan took up land in the area around 1830 and built Galong House.

St Clement's monastery was opened by the Redemptorists order of priests in 1918 and major additions opened in 1954. It educated some 2000 men before it closed in 1975. One student was commentator Greg Sheridan. It is now a retreat centre run by the Redemptorists and the Sisters of St Joseph, Goulburn.

All content from Kiddle encyclopedia articles (including the article images and facts) can be freely used under Attribution-ShareAlike license, unless stated otherwise. Cite this article:
Galong, New South Wales Facts for Kids. Kiddle Encyclopedia.